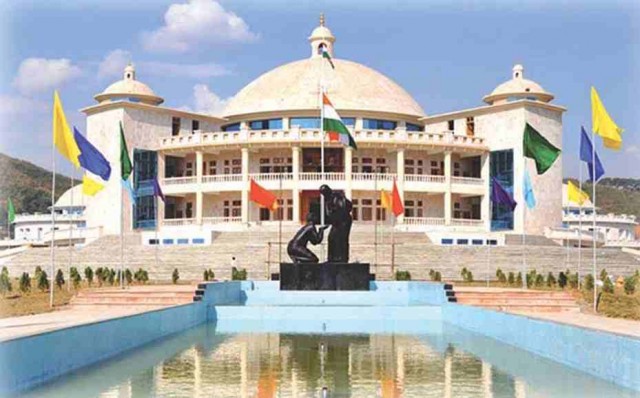 According to The Sangai Express (English edition) news – Dy CM gives clean chit to cops, dated 26th February, 2016 – it states, “Deputy Chief Minister and Home Minister Gaikhangam has categorically stated that no Manipur police personnel harassed or assaulted or abused with communal words any team of the Naga Students’ Federation (NSF).” In the same news, the Home Minister of Manipur is recorded to have tabled his own statement on the floor of the House in Manipur Assembly, saying, “The Government of Manipur or the State police do not have any communal outlook and this I would like to convey to the NSF through the Manipur Legislative Assembly.”
According to The Times of India, Five cops suspended in Manipur, NSF calls off stir, dated 27th February, 2016, it states, “The Manipur government has suspended five police personnel, including Sub Inspector (SI), bringing to an end the tussle between Naga Students’ Federation (NSF) and Manipur Police over harassment of NSF leaders by some policemen.” The same news also further conveys, “Following the suspension, the NSF has reportedly withdrawn its ban on movement of vehicles owned by Manipuris in Naga areas.” In the said news, it also writes, “In a letter sent to the president of NSF, Manipur Additional DGP C Doungel said five police personnel have been suspended in connection with the February 14 incident and that a departmental inquiry is being contemplated against them.”
According to Business Standard, Congress MLAs in Manipur revolt against home minister, dated 28 February, 2016, Nongthombam Biren, Congress MLA, said, “We held an emergency meeting at my residence on Saturday night. We resolved to urge Chief Minister Okram Ibobi Singh to take up appropriate actions against Gaikhangam.” He also further stressed, “We are demanding a special meeting of the Congress Legislature Party on Monday [29th February, 2016] to discuss the issue.”
The events can be chronologically summarised as follows;

20 Congress MLAs can bring a new Congress government in Manipur. How?

If 20 INC MLAs revolt and go along with AITC (5), BJP (2), NCP (1) and LJP (1), then the combine strength is 29 MLAs, which is 2 MLAs short to form a new government or to clear the no-confidence motion against the present Ibobi government. To get the magic number of 31, 2 more MLAs can be made to move out of the remaining 27 MLAs of INC to join the team of 20 MLAs. In the case of Nabam Tuki government’s downfall in Arunachal Pradesh, the opposition came from the Congress MLAs only, and after the formation of the new Congress government under the new Chief Ministership of another Congress MLA Kalikho Pul, who also has proved majority and passed the floor test in the state assembly, with the support of 40 MLAs (27 of INC, 11 of BJP and 2 independents) out of 58 membered House [60 seats: 58 sitting MLAs and 2 seats vacant], the Congress Vice President Rahul Gandhi congratulated Kalikho Pul on becoming the new Chief Minister of Arunachal Pradesh. Congress’ Nabam Tuki has 18 MLAs. According to NDTV news, Chief Minister Kalikho Pul proves majority in Arunachal Pradesh floor test, dated 25th February, 2016, Mr. Pul says, “Whoever has the majority can form the government. In a House of 58 members, 30 MLAs are required to form the government and we have support of 41. Moreover, to become the CLP leader, support of only 23 members is required and I have 28 with me.”
The point of bringing Pul’s formation of a new government in Arunachal Pradesh, another North Eastern state of India, is to acknowledge that the Congress party forms another government under a new leadership and more importantly than it is the fact that the party’s Vice President Rahul Gandhi, instead of taking any otherwise actions, congratulated the new leadership of Pul. So, in Manipur, if 20 Congress MLAs revolt and are not happy with the present Manipur Government’s decision taken by the state Home Minister, then the Congress MLAs too, like their counterparts in Arunachal Pradesh, can alter the state government of Okram Ibobi Singh and bring another Congress government under a new leadership which may, and even can, also be supported by BJP, like in Arunachal Pradesh’s 11 BJP MLAs supporting the Pul Congress government.

Why is the revolt and demand of 20 Congress MLAs logical and right?

Conclusion: Honour Manipur Assembly and the people of Manipur

If the present Home Minister who states an official statement in the House and takes an official decision outside the House that ridicules and rejects the honour and sanctity of the House, then both the people of Manipur and MLAs in Manipur Assembly will democratically, constitutionally and legally bring the present Home Minister into task. The resignation of the Home Minister by himself will not only send the maturity in his own political principled life but also strengthen and uphold the honour and dignity of the Manipur Assembly which ultimately is nothing but the honour and dignity of the people of Manipur. The Indian National Congress party has a rule of its own party of ‘No two posts to an individual’, in which the present Congress MLA Gaikhangam should not hold both the posts of Home Minister and MPCC President together, but in the case of Manipur PCC, not only the PCC President holds Home portfolio but also is the Deputy Chief Minister of Manipur. In fact, the same individual holds 3 posts ( Deputy Chief Minister, Home Minister and MPCC President), though there is no post called ‘Deputy Chief Minister’ which is recognised and deliberated separately and distinctly in the Constitution of India because ‘Deputy Chief Minister or Deputy Prime Minister’ is treated like any other minister while taking an oath.

If one Congress man can hold 3 posts at the same time, thereby going against the principle of the party which says ‘one post per one man’, then the larger fundamental question is not only posing against Manipur BJP that how long its President Th. Chouba will continue as its President in Manipur, but also to ask Indian National Congress party in Manipur that when will the Congress Party start honouring its own principle and start publicly showing to the people of Manipur that the Congress Party is a party of principles and ethics, thereby the rule of ‘no two posts to one person or one post per one person’ is to be followed by all Congress men and women including the gentleman who enjoys the position of 3 chairs – Deputy Chief Minister, Home Minister, President of Manipur Pradesh Congress Committee.

The people of Manipur are extremely so tolerant but their tolerance should not be considered as a sign of weakness and disunity, rather such tolerance of exemplary nature is the sign of matured civilization of more than 2000 years of Manipuri civilization and philosophy.

*Ningombam Bupenda Meitei, educated at St. Stephen’s College, Delhi, is a poet and author of 2 books and Founder of The Nehruvian. His third book ‘On Nehru Gandhi family’ is awaited.