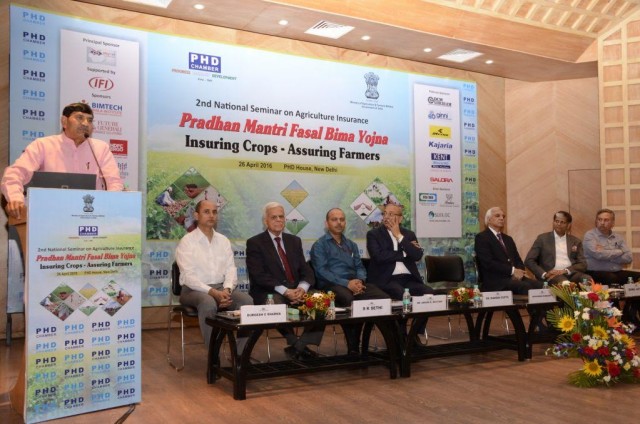 26 April 2016, PHD House, New Delhi: To provide a better financial support to the farmers of the country, Govt. of India has launched the Pradhan Mantri Fasal Bima Yojana scheme in February 2016. A major boost to crop insurance has come via the union budget, which has nearly doubled funding from Rs. 2,995 crore in 2015-16 to Rs. 5,501 crore in 2016-17. As per the new scheme, all farmers are eligible for the new crop insurance scheme irrespective of the condition of taking loan or not.

The theme of the seminar revolved around different aspects of the Pradhan Mantri Fasal bima Yojana and also to focus on all the regulations and technologies like use of remote sensing, smart phones, drones etc, for quick estimation of the crop losses and making the claims process faster.

Hon’ble Minister of State for Agriculture and Farmers Welfare, Government of India, Shri Mohanbhai Kundariya stressed on promoting the Pradhan Mantri Fasal Bima Yojana on large scale and he also added that industrial bodies and insurance companies can play a major role in this regard. Hon’ble Minister suggested that in order to take the scheme up to the ground level Farmers Fairs in villages could be organized. He stated that before framing the scheme Hon’ble Prime Minister of India desired that the scheme should not exist on paper but should effectively reach up to the farmers to benefit them.

Dr. Ashish Kumar Bhutani, Joint Secretary, Ministry of Agriculture and Farmers Welfare, Government of India, highlighted that with the introduction of PMFBY scheme banks would not delay the procedure of forwarding premiums to the insurance companies. He added that the new scheme has penal provisions, wherein banks would be made responsible. He highlighted that the onus would be now more on banks and insurance companies to deliver. He also accented that the PMFBY scheme would be a game changer for the farmers and is the biggest intervention by the government in the field of crop insurance. He also mentioned that through the scheme the government has sought to provide a complete package for risk mitigation.

Dr. Mahesh Gupta President, PHD Chamber and Chairman, Kent RO Systems Ltd. addressed the seminar by giving the glimpses of the scheme and its vital importance. He also discussed the benefits of the scheme for the famers and also the initiatives planned by the chamber for promoting the scheme in various states through organizing seminars and conferences.

Mr. Yogesh Lohiya, Chairman Insurance Committee, PHD Chamber and CEO & MD IFFCO TOKIO General Insurance quoted that PMFBY is a wonderful scheme but success would depend upon the proper implementation and adoption by the maximum farmers.

Mr Sunil Goyal, Senior Member, PHD Chamber and Director, Ganga Roller Flour Mill in his theme address shared about the initiatives taken by the Agribusiness Committee and also the importance of Pradhan Mantri Fasal Bima Yojana in inclusive growth. He emphasized that with the collaboration of public and private players the desired results could be achieved.

Seminar was attended by more than 200 participants including farmers and private players.