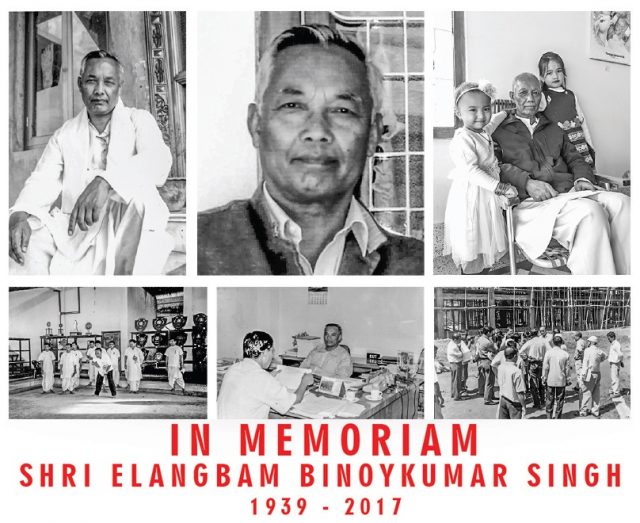 Late Shri Elangbam Binoykumar Singh who was a relative of mine and who I lovingly call ‘Tamo Binoy” was known to me for decades. He was quite close to my late uncle M.K. P.B. Singh and used to come to our house frequently. Till I joined service, our relations can best be described as distant.

After I joined service, he assisted us in building our residential house by providing expert advice. And we became quite close when he was in charge of the construction of the infrastructures for the 5th National Games as I was then working as Director of Youth Affairs & Sports. Since most of the types of constructions were new in Manipur, it was his idea to send our engineers to Bangkok where similar infrastructures were being developed for the Asian Games. At that time we were very concerned about three items namely the indoor Hall, swimming pool and cycle velodrome, the concept and design of which are totally new in Manipur. It was at his initiative and with his core team that these infrastructures could come up to the satisfaction of all concerned and the 5th National Games could be held successfully.

Social service is in his heart and besides various activities towards this end his love for sports made him known to the people of Manipur. When I joined as Director of YAS in 1995, efforts had already been made to develop a common ‘kanglon’ with seminars and workshops being held. I also felt that for this game to develop further we have to have a common rules and through the result of the workshops and seminars, the Department of YAS published a common kanglon. He as President of the All Manipur Kang Association was instrumental in universalising this common kanglon. I am glad to say that this kanglon is now the sole rules governing this game. Earlier there were a number of rules varying in critical aspect of the game thus making the players to adapt in different tournament, which stunted the growth of the game. And towards unifying the game, he will be remembered by all those who love kang.

When my late uncle wanted to erect a memorial stone at Tenggon Lampak, where the battle of Khongjom (battle of Sapam to the British) was fought in 1891, he offered his assistance in bringing the rough stone from Sanahal Lokchou to our residence and after carving the memorial stone then to the site. It would however deserve a mention of the physical work put by Col. K.I. Singh and his ex-servicemen team to load the memorial stone at our residence and unload it at Tenggon Lampak. This memorial still bears mute testimony to the brave-hearts who died at this site fighting for their mother country.
His interest was not only in indigenous games but also in modern games like basketball for which he was the President of the State Association. His final achievement in the field of sports was when he was elected as the President of Manipur Olympic Association. His fairness, sincerity and dedication towards sports are still being remembered. Manipur was very successful during his tenure in the Andhra Pradesh and Assam National Games.
He was also associated with various organisations like Rotary Club, ISKCON, his local club NACO, etc. His association with Manipur Adventure & Allied Sports Institute will be remembered by all those associated with adventure sports in Manipur.

His humility and commitment can be gauged by the fact that when he was appointed Member of the Manipur Public Service Commission, he dropped by to learn the intricacies of the functioning of the MPSC as I was earlier working as its Secretary.

My last association with him was at the Govindajee Temple Board where we became members of the advisory body for the construction works being taken up. His knowledge and dedication despite his ill health encouraged all of us to work harder.

When we started the magazine neScholar at the time of my retirement from service in 2014; we solicited his service as a senior advisor and he so willingly agreed and gave us a series of advices to improve the quality of the magazine for which we are extremely grateful and we in the magazine will remain indebted to him.

Tamo Binoy is no more with us and the void will be difficult to fill. His family would feel thousand times more the loss than those of us who were briefly associated with him. May God give the bereaved family the courage to face life without him.

Download the pdf file : A BRIEF SKETCH OF THE LIFE OF (LATE) ELANGBAM BINOYKUMAR SINGH