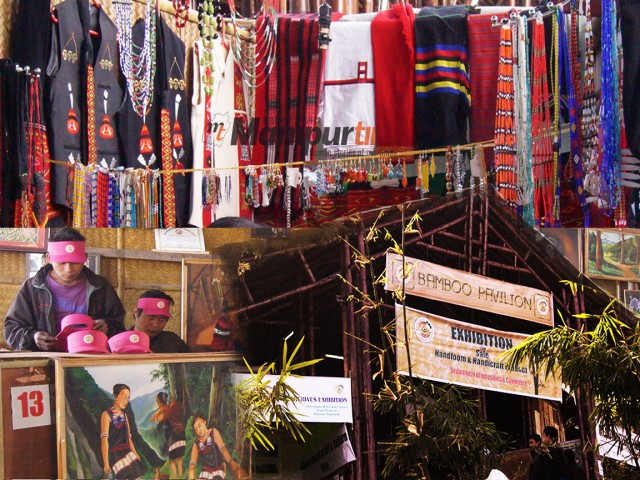 A banner like Windows to Nagaland. Paintings that depicts the lifestyle of the ancestors. It is just like browsing the pictures of a newly brought book ahead of the school session for the next grade. The hornbill festival was an easy browse that enhances knowledge about Nagaland especially about the people living in the State culturally, ethnically, fabric wise to the tourists and the citizens of Nagaland.

There was this artisan who sat in a row of artistic display carving the wood with his skillful hand. Visitors are amazed at his work live on stage. The artistic work really thrilled one’s mind and heart. People at least were exposed to the making of their commodity.

It makes it more aesthetic when another stone carving and slab artists were sighted engaging in their own majestic work. It was like one of those amazing program in the discovery channel. Inclusion of the artisan work site was the tapping of craft tourism.

Yet there was another guy who just sat and sketches the portrait of a visitor in front of his canvas. Things look so moving and happening much to the delight of the tourists.

The bamboo pavilion with merchandise products selling T shirt printed Nagaland on it. There was this branding concept in the festival, a branding for the state Nagaland. The colorful bracelets, necklace, bangles belonging to different tribes filled some stalls and a walk through the pavilions seems to be a trance. There are garment stalls, and many other craft stalls in the pavilion.

An outsider gets to know of Nagaland during this festival which would take them several months to know about Nagaland touring and visiting several places of the State. When you are given a compact knowledge to tourists it passed on to other tourists back home. And I guess there are more foreign tourists during the festival every turning year.

On costume and traditional show piece, every Morung (typical house of a tribe) depicting lifestyle, custom, work of a particular tribe at the heritage site were seen with a pair of man and woman in their traditional wear till the end of the festival. Tourists mingle around with the cultural troupes dancing and singing the folk songs at the Morung.

There was this snap session with the tribes attired in traditional dresses.  The memory a tourists take away home was of utmost value. The people living in the state are well defined in these small but meaningful steps. The branding was excellent. The fabrics were exposed at the maxim and there was more thrill to the visitors.

A compact band from different countries sung one song at the hornbill rock fest at a separate venue near the Secretariat. There was this band call DNA where a 4 year old boy beat the drum while his mother strings her guitar. And a million rupees price money for the winner of hornbill rock fest indeed encourages many bands from across the nation and beyond to participate. The rock fest on the other hand was shaping music talents in an overall view. In fact the hornbill rock fest makes it possible for many music lovers to come at one place and feel the fusion of notes in an ambience set up.

Adventure wise the hornbill riders meet also draw many bullet riders to join the festival this year. Horse power ride contest in the four wheeler category adds to fun. Motorcade was another addition. There was this chef contest going on for delicacy cooking and much other stuff at the three open air amphitheatre at Kisama the festival site also the Nagaland Heritage site.

The hornbill festival was a complete platform. A space sufficient venue to have good time and a trek up the hill for trekking lovers where “Nagaland Heritage Site” was imprinted.

The thatched hut fancy food outlets with bamboo bench and desk occupied by visitors was a unique site as one did not get to see such a fast food center built by bamboo around the city or town most often. It adds to aroma of the exotic cook served hot and fresh at the festival venue.

War memorial complex that depict the Second World War where Japanese army fought with British army picks up attention from several visitors. The ruins of the war in a dummy set up, the details and significant events on a daily basis written in words were salient feature of the complex. The tapping of the war memorial tourists seems to add value, the combination was made strong.

Camps were open at various places where tourists rest in the tents and have their meal from the fast food centre. One such camp was Chaca near the Secretariat which was not far from the Rock Concert ground. Bonfires and merry making takes place in the camp site set at the slope of the hill with a natural setting.

There was this DJ night happening around the town, most of the youth had a great time. The night bazaar at a street where you buy toys and other stuffs with Street foods serving momo and other quick bites attracts everyone who came attired in good dresses. The street was crowded. It was the time when you meet friends with festive mood. There was this music playing in the street. The young ladies were seen with high boots. There was this family walk, some youth make laughter yet their foot make way, some were busy munching the street food and they seem to be in fun having eatable in the middle of a huge crowd. Yet there are few people who were staring at the passerby from the side of the road. It seems everyone in town came out with their festive mood and they seem so happy in their outlook. The hornbill festival at this evening hour of a walk at a street was warm it signifies the public participation and their appearance at the occasion.

Documented photos were kept at the open stall for interested buyer who would have a picture memory of the festival at the main venue of Kisama. The stocks were upgraded on a daily basis. The venture was a great service and a promotion to the festival.