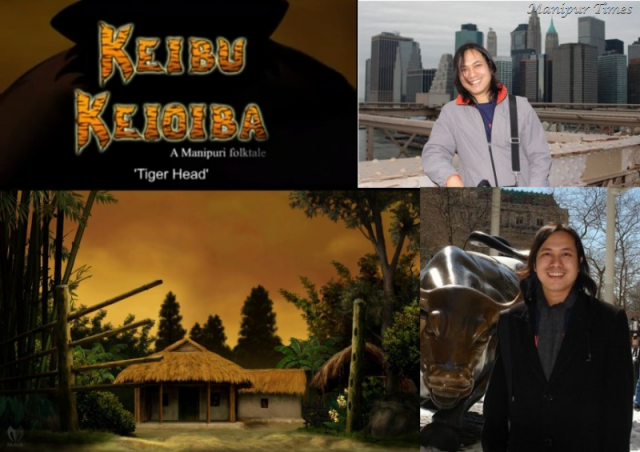 Determination and passion always bring success to everybody. The extraordinary determination of Bhumenjoy Konsam is the major factor why he could mould his passion into a successful career. Born to a government school principal and a housewife hailing from Khundrakpam, a small town located 8 km away from Imphal, Bhumenjoy is the youngest among four siblings – one sister and three brothers. He studied at Tiny Tots Unique School, Dewlahland up to 10th Standard and completed his higher secondary education from Manipur Public School, Koirengei.

Bhumenjoy opened up on how he chose multimedia as his career after studying Chemistry in B. Sc. and M. Sc. Although, he got admission for M. Sc. Chemistry in Pune University, his passion for art since childhood never moved him away from getting into multimedia. After three months of his enrollment in M. Sc. in 1997, he was still indecisive about his career. He could not frame a clear picture of his future with the stepwise academic process. Bhumenjoy was in complete dilemma – he neither had the right answer to the question over his career nor had anybody to guide him. He got negative responses from those who didn’t have any idea of his passion when he talked about discontinuing his M. Sc. Even though it was really difficult to follow his mind as many of his friends and relatives raised eyebrows when he talked about giving up the conventional education, Bhumenjoy followed his passion with his father’s support.

Being a teacher, his father did not object the wish of his son and asked him to go ahead if his heart had the trusted. At the same time there was nobody to guide him and he never got any idea regarding his career and job prospects by pursuing M. Sc. So he ended his path of pursuing M. Sc. and Ph. D.

FINALLY, HE GOT INTO MULTIMEDIA

He joined a One Year Diploma Course in Multimedia at Arena Multimedia Institute. But still he was unable to answer the question, which was lingering in his mind since many years back. He established an alternative answer to it. He compromised himself and to his near and dear ones by stating that he was preparing for competitive exams. He said that he did not know why he chose that path. Forget multimedia, he did not have any knowledge about computer then. Drawing was his passion and he used to draw everything that came in his mind. He got influenced by the pictures in the comic books when he was young and he kept on doing that alone. He never went for drawing or painting classes in any school or art centre, but his great enthusiasm of art could make him a good painter or artist. And this strong passion helped him in taking the daring step of leaving M. Sc.

ANOTHER CROSSROAD TROUBLED HIM

God helps those who have the will to do something. The first competitive exam which Bhumenjoy cracked in his life was Combined Defense Services (CDS) Exam. All his friends and relatives wished him and asked him to join the army job as it was the best chance and it was not easy to get a good government job which would provide a secured life.

The tradition for insisting to grab a good job and live an easy life was adopted by the elders/parents no matter what was in the minds of their children regarding their interest, desire, passion, devotion and enthusiasm. And it is still a difficult situation to compromise, which is still prevailing in our society. At the completion of six months of his diploma course, he got a job offer in a multimedia company. Bhumenjoy was in dilemma again, standing at the crossroad of two different paths; one presumably went towards a secured life while other went to his passion. At that time too, he did not leave his passion, he picked the multimedia job even though the package was meager.

He put a step ahead in his long time dream by doing the job in the multimedia industry and it was his wish too. But he faced troubles there in the industry too, he recounted.

Life before getting a job is a struggle, and after getting a job is a battle. The industrial experiences he faced were numerous no matter how big or small it was. He had to follow the schedules, go forth and back from work as if the time was governing his life every day. He could not share the happy moments with his friends like he did during college life neither he could sleep nor wake up late and bunk the job. After experiencing such new environment for around two-three years, he adapted himself to his new world.

Bhumenjoy said, “No matter how good a job is, if the person is not willing to do it then it is the worst job”. He began to shift his job from one company to another along with better position in his career and better experience. His creativity of art and making animation began improving gradually, he said and it was due to the experiences he got from his work-mates and different companies.

In 2007 he took a crucial decision to leave his job searching for a better profession. And it was the second time he faced similar insistences not to do it from his friends and family members as his position in the multimedia industry was good. Whatever he did and worked were for others, not for self recognition and his long-dream passion. Bhumenjoy is a man of strong determination, so he decided to leave the job. He took that extreme risk after persistent analysis but not just blindly.

Bhumenjoy then began to work for commercial animations and other short films which was the initial point of making Keibu-Kei-Oiba. He began to work on designing and animation for new media like i-phone and its application, human interface applications and user interaction programmes. Now he is working in Clear Points Learning, an American based e-Learning company experimenting User experience design. He deals with both 2D and 3D animations in which he prefers 2D for having broad market. According to him, making of 3D animation is costly, complex, time consuming and need involvement of many new software and hardware.

Bhumenjoy shares his thought that if you are well passionate about multimedia, then follows it. One can set up a good career in multimedia. Nobody should walk on the path somebody pushes to if he doesn’t like.

Original Podcast is available at FindingTheVoices.com by MONICA INGUDAM  (Episode-36)