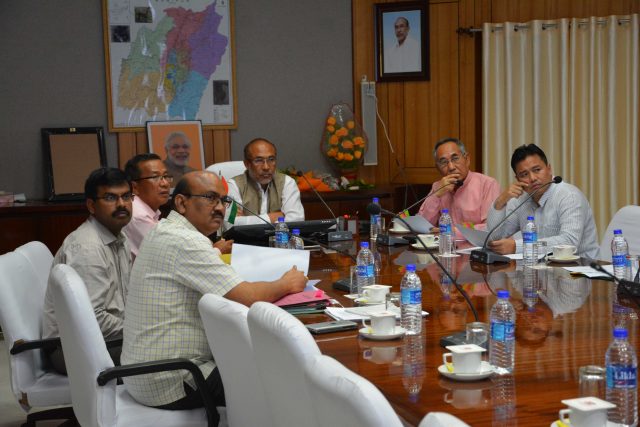 As per the revised policy approved by the State Cabinet in its meeting held in the Cabinet hall of the Chief Minister’s Secretariat with Chief Minister Shri N. Biren Singh in the chair, the monthly stipend of the surrendered underground cadres would be hiked from Rs 4000 to Rs 8000 per month for a period of three years. Out of this Rs 8000, Rs 2000 shall be counted as ration money.

Moreover, one time financial grant provided by the Government to the surrenderees would be increased from 2.50 lakh to Rs 4 lakh, and this amount should be kept as fixed deposit in the bank account of the surrenderee for a period of two years, with an option to withdraw after the completion of three years.

They would also enjoy the facility of medical reimbursement up to 75 per cent of the total expenditure during stay at rehabilitation camp on the ailments declared eligible and notified by the State Health Directorate.

Apart from it, there are job prospects as well in the security forces for the physically fit cadres with special relaxation in terms of age and qualification for employment in special battalions.

The Cabinet also gave its nod to raise a special unarmed battalion for surrendered militants.

The Cabinet also approved the proposal for the appointment of a Media Advisor and a Coordinator to Chief Minister.

The Media Advisor will communicate with the public and media affairs to highlight various important works and issues being taken up by the Government. The Coordinator will coordinate with various Government Departments on behalf of the Chief Minister.

The State Cabinet also decided appointment of next of kin of the eight deceased persons and nine persons, who became disabled due to police firing on August 31, 2015 at Churachandpur in different Grade III/IV posts in the State Revenue Department. In addition to an ex-gratia of Rs 5 lakh each, which was announced earlier, an additional financial assistance of Rs 5 lakh each would be given to next of kin of all the eight deceased persons.

The State Cabinet also decided to convene a special session of the State Legislative Assembly from June 5 to 7, 2017 to enable passing of the Manipur Goods and Services Tax Bill, 2017.

The Cabinet also approved extension of disturbed area status in the State excluding the Imphal Municipal areas for another six months.

On the other hand, the State Cabinet also gave its nod to re-establishment of the Technical and Promotion (TP) Cell of the State Co-operative Department.

The Cabinet also approved the draft Manipur Municipalities (11th Amendment) Bill, 2017 to make changes to the nomenclature of Councillor as Corporator in case of Municipal Corporation.

The Cabinet also resolved to establish the Manipur Infrastructure Development Agency (MIDA) in order to conceptualise and implement projects in mission mode in the field of social infrastructure.

The agency will prepare concepts and DPRs and submit to the concerned Ministry and funding agencies for required funding to the State Government. The agency will be established by the State Planning Department under the Societies Registration Act, 1986.

The Chief Minister, Manipur will be the ex-officio Chairman of the agency.

Regarding providing of ex-gratia to the victims of road accidents and extension of the revised ex-gratia amount to the families of those killed and to those injured Army/CPMF/Assam Rifles personnel in extremist violence in the State, the Cabinet also decided to consider on case to case basis.