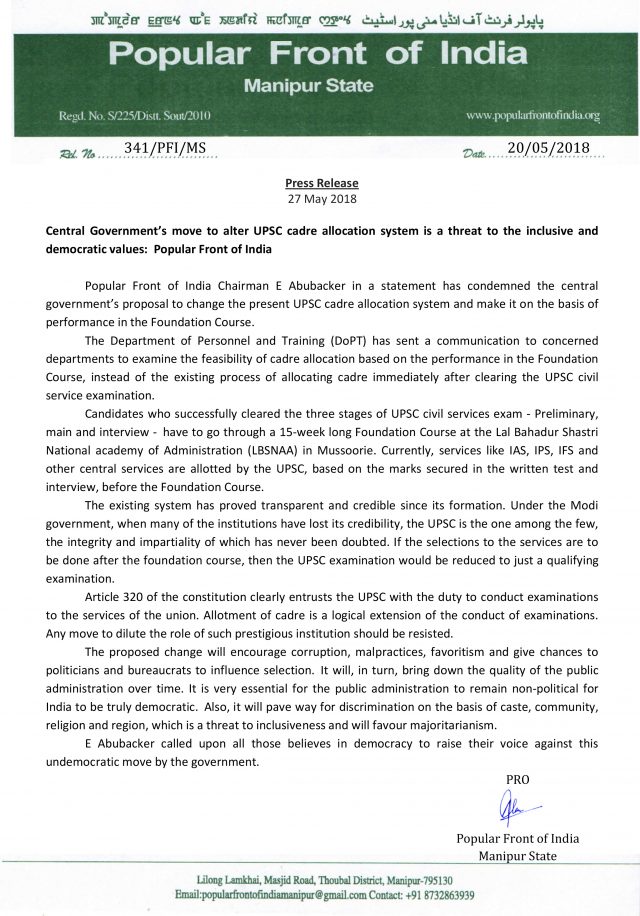 27th May 2018 : Popular Front of India Chairman E Abubacker in a statement has condemned the central government’s proposal to change the present UPSC cadre allocation system and make it on the basis of performance in the Foundation Course.

The Department of Personnel and Training (DoPT) has sent a communication to concerned departments to examine the feasibility of cadre allocation based on the performance in the Foundation Course, instead of the existing process of allocating cadre immediately after clearing the UPSC civil service examination.

Candidates who successfully cleared the three stages of UPSC civil services exam – Preliminary,main and interview – have to go through a 15-week long Foundation Course at the Lal Bahadur Shastri National academy of Administration (LBSNAA) in Mussoorie. Currently, services like IAS, IPS, IFS and other central services are allotted by the UPSC, based on the marks secured in the written test and interview, before the Foundation Course.

The existing system has proved transparent and credible since its formation. Under the Modi government, when many of the institutions have lost its credibility, the UPSC is the one among the few,the integrity and impartiality of which has never been doubted. If the selections to the services are to be done after the foundation course, then the UPSC examination would be reduced to just a qualifying examination.

Article 320 of the constitution clearly entrusts the UPSC with the duty to conduct examinations to the services of the union. Allotment of cadre is a logical extension of the conduct of examinations.Any move to dilute the role of such prestigious institution should be resisted.

The proposed change will encourage corruption, malpractices, favoritism and give chances to politicians and bureaucrats to influence selection. It will, in turn, bring down the quality of the public administration over time. It is very essential for the public administration to remain non-political forIndia to be truly democratic. Also, it will pave way for discrimination on the basis of caste, community,religion and region, which is a threat to inclusiveness and will favour majoritarianism.

E Abubacker called upon all those believes in democracy to raise their voice against this undemocratic move by the government.