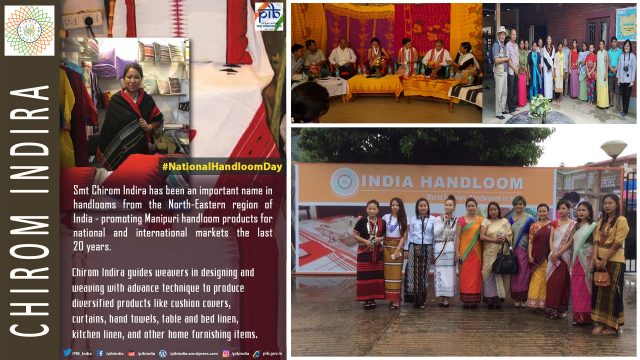 10th August 2017 : The women weavers of NE region perform multiple roles of being handloom producers and trading of handloom products. As there are no cloth mills, or large number of powerlooms in the region, weavers put their hard labour by working manually. In the process of earning income, they preserve our culture and heritage by laboriously producing traditional clothes. Handlooms being a traditional occupation, women find it convenient and safe to work. The region has contributed an important share in handloom sector in terms of number of employed or owning of looms. When the number of handloom weaver households decline in India, the region recorded increase of number of weaver households from first (14.6 lakh) to the third (15.1 lakh) census. But the sector is not progressing as expected. Income from handlooms and its contribution in the household economy is less as compared to other States. It is largely dominated by domestic production and part time weaving. Various issues like social and cultural aspects, demographic profile, production, employment, market structure, technology and skill are analysed for understanding the present condition of handlooms. The factors contributing in promoting handloom sector are identified so that mobilisation can be done for promoting it as a livelihood activity.

The NE region is taking a place in the nation map for handlooms sector and it could find a niche market if proper planning and policies are framed. Women weavers though largely dominated the handlooms sector in this region, with changing market structure and competition, they face conflict and compromise. They are still using manual looms with low technology base which affects production. If appropriate action is not taken, then there is a fear of replacing the handloom products by imported materials. The responsibility is also with designers to focus on the handloom products instead of western garments to bring back a proud tradition. There is an expression of feminism in the NE region patrilineal society which encourages women to be self-reliant, economically active and collectively powerful. Thus, they felt that engaging in weaving which is a traditional feminine occupation increased their socio-economic status instead of sitting idle at home. We also need to acknowledge the significance and openness to new concepts to bring a more positive understanding of the women’s participation in the economic activities because for many of these women, working in the handlooms sector is a matter of contributing economically to the family and supplying clothes for the family members. Increasing productivity by working as full time rather than part time will make handlooms production more sustainable for livelihood. Weaving being a traditional feminine occupation, many women, be they educated or illiterate, got jobs in this sector. Therefore, with suitable public policies for this sector, large employment opportunities can be created for the women of the region. It is also a source of livelihood, especially in industrially backward States of north -eastern region (NE region) of India for a large section of rural women.

Chirom Indira was one of the Handloom Entrepreneur, Designer, Exporter, and Social Worker from the North-Eastern Region of India – promoting Manipuri handloom products for national and international markets. Her dedication and contribution for the development of handloom sector and working for the women empowerment made her a well-known figure in the region. She was born in Sagolband Sayang Kurao Makhong, Imphal West (Manipur). Being the eldest of siblings, she had a sense of responsibility. Activities such as social works, women empowerment and development of socio-economic condition for the weavers were always close to her heart. She is a ‘‘Graduate’’ from Manipur University and has a professional qualification of ‘‘Diploma in Handloom Technology’’ from Indian Institute of Handloom Technology (llHT), Guwahati.

She has never been one to rest on her laurels. She has always looked ahead, towards newer challenges. Her natural instincts and foresight have always led her to the next frontier. She performed silently and continues to let her works talk for them. She is one of the very few people who are not money driven in their cause but work round the clock to bring about a change of socio-economic conditions of the weavers. She has always maintained a very positive and friendly attitude towards all the section of peoples. She loves people, works hard and always tries to lift the spirits of those around her. She was the front contributor to the transition of weaving from traditional products to the modern products. She adopted many traditional techniques and designs. She guided many weavers in designing and weaving with advance technique. Her creations were displayed in various National & International exhibitions organized at different places.

She was the member of various committees under O/o DC Handlooms, Ministry of Textiles, Govt. of India for the development of handlooms & textiles sectors. At present, she is member of “ALL INDIA HANDLOOM BOARD (AIHB)”. The enthusiasm with which she has been promoting the handloom sector of the Northeast Indian region, Chirom Indira has achieved great recognition and we hope that in future, the Northeast will be able to exploit its potentials and make a name for itself all over the world. Her hard work moving towards the fruitfulness tomorrow’s generation with a new identity and bringing smiles to thousands of weavers in the region. She was confered “National Award” in ‘‘Design Development of Handloom Products’’ by O/o DC Handlooms, Ministry of Textiles for her philanthropic work in the handloom sector in the year 2016.
HANDLOOMS PROMOTION COUNCIL, MANIPUR
Regd. No. 166/M/SR/2005