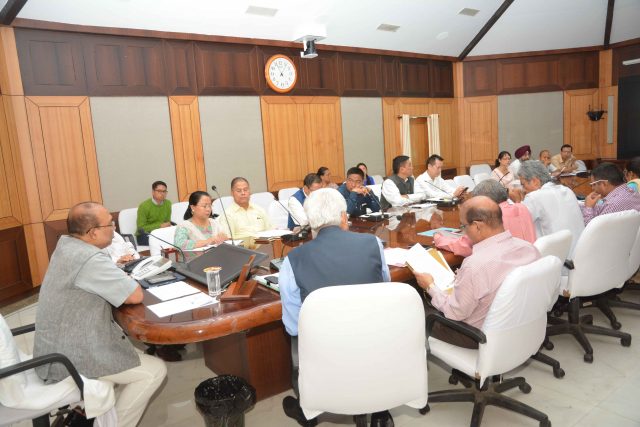 Imphal, September 19, 2017 (DIPR): Chief Minister Shri N Biren chaired a review meeting on the progress of biometric capturing/ Aadhar enrolment in hill districts of the State. The meeting was held in the Cabinet Hall of Chief Minister’s Secretariat today.

During the meeting, the Chief Minister instructed the respective MLAs of hill districts and DCs concerned to co-ordinate with MANITRON and In-Media to complete the entire process of biometric capturing of the individuals by 31st December, 2017. Mentioning that the concerned DCs are responsible for the completion of Aadhar enrolment in the State, Chief Minister informed the DCs to communicate with him when they face any issues or problems so that immediate intervention can be made to solve the issue. He stated that he would also personally monitor the whole process. He said that there will be procurement of additional Aadhar kits to complete the whole process of biometric enrolment within this year.

Stating that the rate of biometric enumeration in almost all the hill districts is very low when compared with valley districts, the Chief Minister observed that Aadhar cards/numbers are necessary to get the Direct Benefit Transfer (DBT) of various welfare schemes of different departments. Chief Minister further directed the concerned DCs to organise awareness campaigns for the enrolment of Aadhar and should set up teams and co-ordinate with MANITRON and In-Media for timely completion of Aadhar enrolment in the State. Department of Information Technology should open more CSCs to the hill districts of the State, he added. He directed the DCs of hill districts to use satellite imagery maps to verify the bogus census data of the hill districts.

He directed the Home Department to sanction the required amounts in the next 3-4 days for the completion of Aadhar enrolment in the State. The meeting decided to provide training for the teachers and staffs of the Deputy Commissioners to know the technical know how to operate the Aadhar machines so that they could pass the test conducted by UIDAI.