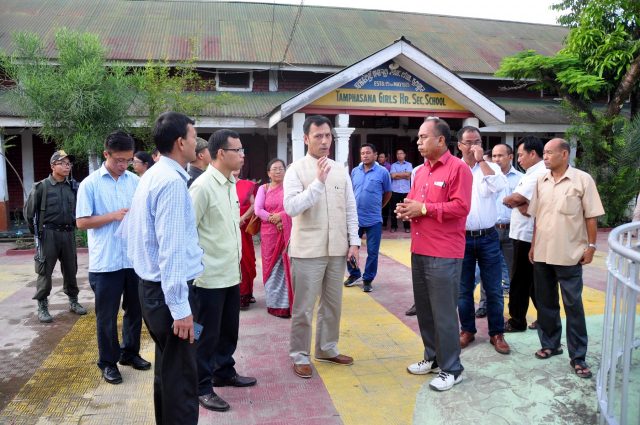 Imphal 7th July 2017 (DIPR): Education Minister Shri Thokchom Radheshyam said education and health are the two main sectors on which the new government lays its importance to strengthen it for overall developmental course of action in the state after the completion of first 100-Day programme.

Th. Radheshyam points out that many students after passing their high school examination faces difficulties in getting admission in the state as well as outside due to financial problem. T. G. Higher Secondary School, being one of the best government higher secondary with high demand for admission, was tried to identify the needs and requirements so that at least few extra necessity could be fulfilled to admit the students. So in order to accommodate them in getting admission a discussion was held with the Principals, Vice Principal and Director of Education (S) and also met the parents and guardian of the students to find a solution.

During the inspection, he inspected the science laboratories, the girl’s hostel and the undergoing construction works of the school. Seeing the leaking roof with water logging inside the laboratories, he said, immediate plan to mend the dilapidating condition of the lab would be taken up. In terms of the hostel, which is under-construction, and the incomplete section where the students have already shifted, the minister said he would look into it and try to complete it as soon as possible.

The minister appreciated the clean and orderly environment around the school. He also proposed a social service on the coming Sunday along with students and teacher in and round the water logged areas within the campus.

He said, the problems related to education department have been identified and will be solved on priority basis. He expressed his gratitude to the organizing committee for organizing such kind of felicitation programme. He expressed his desire to convene such programme for the teachers or the students who had excelled in national or international levels.

He urged the gathering that everyone should have the courage to stand against the wrong so that we can encourage the young minds to be brave to face the challenge bringing a positive change in the society. We as a whole need to enhance the values and moral with sincerity, dedication, sacrifice and committed mind.