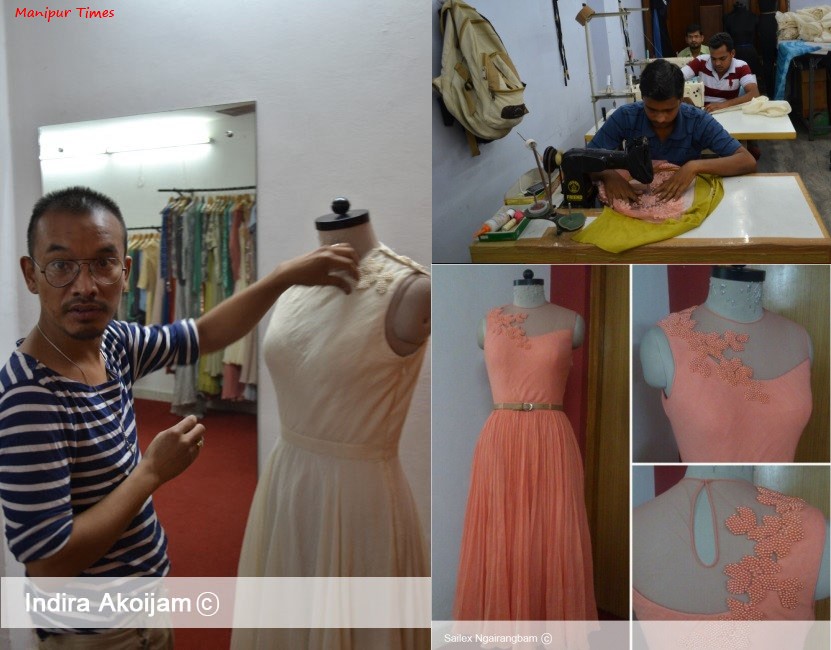 Designer Sailex Ngairangbam, popularly known as Sailex launched his self-titled label in 2008 with a desire to translate his love of fabric, colour, and silhouettes through his outfits. Five years ago, he commanded the attention of the fashion industry at the Lakme Fashion Week by becoming one of the Lakme GenNext Emerging Designers of India. Sailex’s design has come a long way since then.

His latest collection called the Garden Safari, inspired by the military, was received very well by fashion critics and celebrities. But he says it has never been that easy.

“I usually work continuously for a month on a collection especially the last few weeks leading up to the show” says Sailex. And while he works on his collection, he has all the looks decided in his mind. It allows him to sort out his pieces for the show. Sailex follows a pattern when he brings out his garments on the ramp. He follows the colour wheel where he starts with whites and muted tones and slowly transcends to stronger and darker colours. Yet, each garment exudes its own individual sensuality.

Part of what drives Sailex is his desire to keep up with the fashion industry and incorporate his strong design sensibilities in his collection. And he strongly believes that any new and upcoming designer working for another label should move out soon enough before they start moulding themselves and lose their design aesthetics. He considers himself fortunate that he didn’t work under any designer in his career. However, he worked for Lee at Arvind Brands where he brought out a line of undergarments for women while working for the company after graduating from NIFT Bangalore. But he wasn’t cut out for the corporate world. He left his job much before the probation period ended. He then went to the Domus Academy in Italy which he believes brought a lot of design sensibilities in him.

Fashion magazines have found it hard to ignore the effortlessly sophisticated designs in all his garments including fashionistas and celebrities who are loyal fans of his label, Shibani Dandekar and Sona Mohapatra to name a few. Tinseltown fashionistas have been also gracing the covers of fashion and Bollywood magazines in his outfits. And taking a cue from his popularity of his saris apart from his western outfits, he is currently working on his Indian line.

His designs have evolved a lot since his first collection in 2008, from androgynous elements such as tuxedos to classic and flowy silhouettes as seen in his Garden Safari collection. Having celebrities like Sonam Kapoor wear his label and television anchor, Shibani Dandekar, who is also a good friend, being spotted in a Sailex outfit almost all the time, he does say that his clothes have become more visible which is a marketing boost to his label. But this doesn’t mean he dresses only celebrities. When asked on whom does he want to see his outfit the most. He says he would love to dress any woman who is confident, edgy and able to carry off his outfit irrespective of whether she is a celebrity or not. He also has been relentlessly getting mainstream coverage, and also named among fellow brilliant designers like Kallol Dutta, who is also a good friend and has visited his hometown in Imphal recently with him.

In his design studio at Shahpur Jat, New Delhi, one would fine Sailex overseeing the kaarigars, and working on his new line. For his collection, he takes colour inspirations from everyday things. He would collect colour swatches and fabrics and would work his designs around it. He also says that music plays an important role in deciding his collections. And even when he’s not designing, he loves listening to music. He says his taste in music keeps changing and he constantly evolves his music genre. Currently, he is listening to a lot of Electronic Dance Music artists.

Sailex who hails from Imphal, Manipur has made it in the mainstream fashion by creating a niche for himself without having to take any reference from Manipur. And also considering the fact that his mother is an award-winning craftsman, he has instead crafted his designs using rich and luxurious fabrics like silk and lace in creating ready-to- wear western outfits which have become a cult. However, he recently used a basic cotton fabric or the phadi from Manipur and designed contemporary and high fashion outfits. He says a designer makes an outfit with the idea of selling it. And hence it’s important to create something that can be worn. It is handloom but doesn’t look like it. And that’s what Sailex believes in, creating garments that can sold across mainstream buyers.

On being asked about Manipur fashion, he says that the fashion scene in Imphal has not matured. It still continues to be a form of entertainment alone.The idea of having designers and showcasing their collection in a fashion show has to steer out of entertainment alone and focus on the business perspective. He strongly disagrees with the way some younger designers have been altering or styling the traditional way of wearing phanek and phi. He says draping a phanek in other ways than the usual doesn’t define creativity or fashion.

He says that Manipur needs to break away from the mould of merely having a fashion show as a means of entertainment. It’s as if fashion shows are always a compulsory part of any cultural festival. What exists in Manipur is simply a cultural parade sans the fashion and business, observes Sailex. Most recently, foreign models were flown in to the state for a fashion show. Although it created a lot of buzz within the state, but nobody has looked into the core and the business aspect of fashion per se. Sailex questions, “Why are the young designers not getting into the depth of textile and creating designs that are not only aesthetically good but also saleable?” He also says that many designers in the state have not explored the business opportunities in Manipuri textile. Little has been done to explore and promote Manipuri textile to mainstream buyers. Foreign buyers find it exquisite but nobody has come ahead and promoted it at the global level. Textile and handloom in Manipur has very strong roots. Why not leverage on that and create something that can be sold in the market, asks Sailex. He suggests designers in Manipur can work with local weavers and artisans to create fabrics and work that into creating ready-to-wear outfits. He warns that handloom will die an early death if designers do not revive the textile industry. He believes that the idea of handloom is disappearing because sitting on a loom according to the modern generation is a waste of time. Manipuri women made sure that their daughters learn it. He also says women usually works on the loom, but why confine it to them alone, even men could work on it. Manipur thus have to steer away from simply targeting the local consumers but make textile and fashion a business keeping the essence of Manipuri culture intact. Sailex says if he ever does a show in Manipur, he would design an outfit without tampering the culture. The idea here is to create a market value of Manipuri clothes which no one has done so far.

Indira Akoijam freelances with Manipur Times and is currently working with a media research house in New Delhi. For feedback write to akoijam.indira01@gmail.com