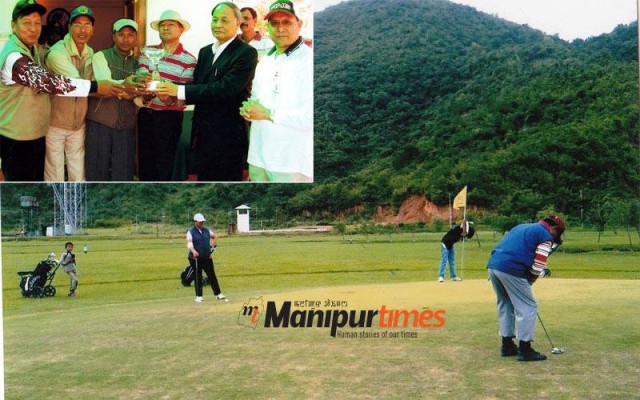 The first golf centre in Manipur was established at Kangla with 9 holes. Second at Leimakhong, where layout and coaching is done.  Third at Mantripukhri. Other golf centres started to open in due course of time.

Manipur golf association was established under the initiative of Sougaijam Lalit and certain progress took place. A four hole golf course began to operate at Khuman Lampak where the golf association had its office. The association started organising tournaments regularly. Some of the patrons of golf in Manipur include former governor Sidhu.

At Mantripukhri 9 hole golf course, tournaments with more than 40 participants including officers from Assam Rifles, civil and individuals kick-started and is still going on.

Manipur golf team under the guidance of Manipur Golf Association represented the State in the National Game held at Punjab. Four men and three women golfer played their best during the game. Ever since Manipur has been included in the golf map.

Bashantakumar  Wangkhem memorial,  Koijam Mema memorial, Roshankant memorial  are some of the grand golf tournaments in Manipur. Besides governor cup is one of the oldest tournament. It started at the governor bungalow.

Thokchom Iboyaima memorial cup was another tournament organised and likely to be in the card in the coming year.

The office at Khuman Lampak was shifted to Lamphelpat Officers Club as Manipur Cricket Club and other association started to open up. Fund rising from the members started progressing and new members got enrolled satisfactorily.

The association is still without an outdoor golf course. Initiatives were made earlier for a golf course in Manipur but the government seems to turn away from the development as the projected site is about to be converted as a green park says the members of Golf Association.

“Golf involves mental preparation, meditation, and yoga. If concentration is high shot is good. Golfers settle in a place for ten days, when the coach and manger take care of him the golfer plays best.

A child at the age of 9 to 80 years old one can play the game. Now golf is included in Olympic from the coming Olympic. And I think Manipur has potential resource who can exhibit well.

If we have a 30 feet place we can practice golf, we learn to swing. The game is all about swinging too.  If we practice swinging for a year with mind game and other drill one can become a good golfer “says M Rachandra, Vice President of Manipur Golf Association.

In fact Manipur Golf Association has organised training courses in the past but we need more training programmes to produce good number of golfer in the State expressed Hero Thokchom member  of the association.

M Rachandran continued – “ in India 30 tournaments are organised in the prize money range of Rupees 20 lakhs to 80 lakhs.

Fed X cup is the highest prize money cup in the international tournament which is worth 10 million dollar. In Indian money it amounts to around Rupees 56 crore.

18 per cent of the sponsor amount for the tournament is taken as the winner prize. Other competing golfers also get prize money. In a 120 players tournament of Swiss Bank open, 60 players gets cut off on the  second day closing (miff cut on the second day).

3rd day and 4th day remaining qualified players will resume play. The qualified 60 players get prize money according to the position they score. After subtracting 18 per cent to the winner, proportionately distribution wise the 60th position gets up to Rupee 5 lakh prize money.

If we subtract the travelling and stay cost one gets Rupees 2 lakh gain for the 60th position. If he scored 10th position he might get Rupees Rs 80 to Rs 90 lakhs. If a Manipuri plays he would excel I suppose. I believe in Asia level, a Manipuri can score the top ten positions.

Golf course is eco-friendly. In 120 acre field big course in set up we have designers. There are prescribed fertilizers and is very eco-friendly. We have water body and trees. If there is a bird the tournament is halted. In Delhi course we have many pea cocks. In Guwahati elephants came out we do not scare them off. We do not torture the animals.

He has also won prizes in Red Shield Division Golf tournament in Manipur. Extra Premium Cup organised by ONGC at Mantripukhri participated by participants from Assam Rifle, ONGC Rangapahar players and other individuals. Out of seven prizes Rachandran won 5 prizes 3 prizes were given away to others and that was his biggest achievement. Nowadays the tournament has declared that an individual can win only one prize.

Meghalaya Tourism invitation golf tournament in shilling where 300 players come is another big tournament organised in the North East.

After all Manipur needs professional golfers to bring laurels and since it is the power house of sports in India the association is believing that they can tap good human resource for achieving brilliant feats.