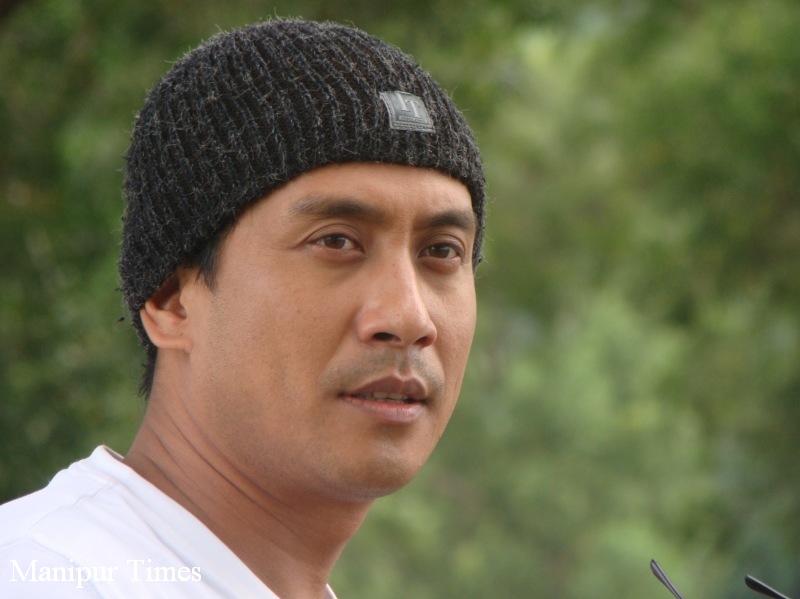 “Initially I was not a singer but a guitarist. But I started singing after the sudden demise of my elder brother, Shivananda. My brother composed some Manipuri songs by playing guitar with me. After he died suddenly, I sang the songs he composed and released it with some other songs of my own in 1995. The name of the audio cassette was ‘Angaobani Haibire’. It was the first audio album in my singing career. After the release of the album, people started asking about me and I started singing in concerts”.

This was how Hamom Sadananda Singh of Sega Road Thouda Bhabok Leikai, one of the prominent singers and actors of Manipur emerged as a popular artiste.

He told Manipur Times that he used to play guitar for local western music bands like Cannibals and Phoenix from 1989 till early 1990s. At that point of time, the influence of western music was huge. One of his elder brothers, Shivananda was also a guitarist with another band called Red Devils. Sadananda’s brother composed some Manipuri songs by playing guitar along with him.

However, with his sudden demise, Shivananda left behind his composed songs with his younger brother. Sadananda then fulfilled the long cherished dream of his elder brother by releasing an audio album of Manipuri songs namely, ‘Angaobani Haibire’ featuring himself as the singer.

Sadananda said, the audio album consists of ten songs including three songs which were written by him. Rest of the songs were written and collected by his brother, Shivananda.

When he released the album, he did not expect that people would love his songs. So he continued with western music and was on a tour in Nagaland for about two months. But luckily, after the release of the album, people liked it very much and people started asking about Sadananda.

Sadananda did not get formal learning of music from anybody before he sang the songs of ‘Angaobani Haibire’. But he had some idea of singing because of his close association with local western music bands. At that time, he had got the Best Guitarist Award.

But he was compelled to leave playing guitar after he became a Manipuri singer.

Later on, he learnt the basic foundation classical music from Oja Moirang Jiten. Sadananda said, he got inspiration from different artistes as he was surrounded by many artistes. One of his uncles is a prominent Manipuri singer and another one is a tabla player. One of his elder brothers is also a tabla player. He got the opportunity to interact with many singers and artistes when they came to meet them. His family also supported him a lot when he started singing.

Till now he has sung around 500 songs. This includes about 100 songs of films acted by him and other songs in audio cassettes and albums.

People love many of his numbers but the most appreciated song is ‘Angaobani Haibire’, because of the lyrics. Although, the album was released in 1994-1995, youths of the current generation who were not born at that period love the songs of the album. Sadananda said that he also likes the songs of this audio cassette and sometimes sings in concerts.

Apart from singing Manipuri modern songs and acting in films he also sings Kirtans. According to Sadananda, this form of music is also needed to know. Besides singing and acting he also wants to contribute his bit to the society. He wants to help the needy children.

In 2000 he stepped into Manipuri digital film industry, and his first film in which he took the main role was ‘Ingelgi Atiya’. Before it, Sadananda had also acted in a celluloid film which was not released. He also acted as a child artist in the film ‘Sambal Wangma’ and his role in the film was an illiterate boy.

‘Ingelgi Atiya’ was a popular play before it was converted to a film. The second part of the film ‘Laallibadi Eini’ was also very successful because it ended on a happy note unlike other films of Moirangthem Inao.

Till now he acted in nearly 100 films. Out of these, ‘Ingelgi Atiya’, ‘Laallibadi Eini, ‘Angaoba Kurao Mapal’, ‘Red Rose’ ‘Thengmankhre Thabalse’ and ‘Reporter’ are some of the films which the public liked much.

He graduated from N.G. College in 1997-1998. He is married with Jina from Sagolband Kangabam Leikai and has a daughter. He is not too much in films nowadays because of time constraints. It is very hard for him to manage singing and acting simultaneously.

He said that singing is a seasonal profession in Manipur. Number of concerts is huge during winter season. It is little thin during summer season. During the pick season, he sometimes sings at about 4-5 concerts a day, Sadananda said.

Regarding singing and acting, Sadananda said, a singer can earn good money of even more than Rupees one lakh in a month. But it is not so in films because of the small market.

He had also been conferred with the Public Choice Award by Nongmaithem Pahari Trust. As a singer and actor he has been awarded Best Singer and Best Actor awards in several times.

In order to maintain the vocal strength, he takes special care while eating. He wants all the artistes of Manipur not to indulge in boozing. He thinks that this will harm the career of the artistes.

He said, “It is very emotional and sentimental when I recall the story of my childhood days”.

He had struggled a lot in his life before he became a popular singer. His mother was running a roadside tea stall and he used to wash glasses in the stall. After he passed Matriculation examination he used to work as a shopkeeper. He even borrowed bicycle from his friends to attend tuition at times. But after becoming a popular singer and actor life has changed a lot. “Now I am able to build my house at least”, he added.

He experienced many bad as well as good incidents while moving at night to attend the concerts. There were certain incidents of road accident and looting. At times the artistes of Manipur had to confront with some indiscipline security personnel but the artistes also got respect and recognition from dutiful personnel as well.

Sadananda is imparting training to young children who want to learn music from him. Some of them start attending Sankirtan programmes.

Apart from this he is taking part in many social causes. As a sports lover he contributes some materials for the children when they need. He wants to help the people specially the poor. He also wants to arrange a welfare policy for the artistes of Manipur. He is also a member of Rotary Club.

The most important thing he wants to do in Manipuri society is to eradicate the culture of mob justice. He feels very sad when people burn the house of a criminal without caring anything about the possible hardships of his other family members.

He appealed all the people of Manipur belonging to different ethnic groups to live together with communal harmony. Let us understand amongst all the communities of Manipur to make our state the most secure and best place in the world, he said.