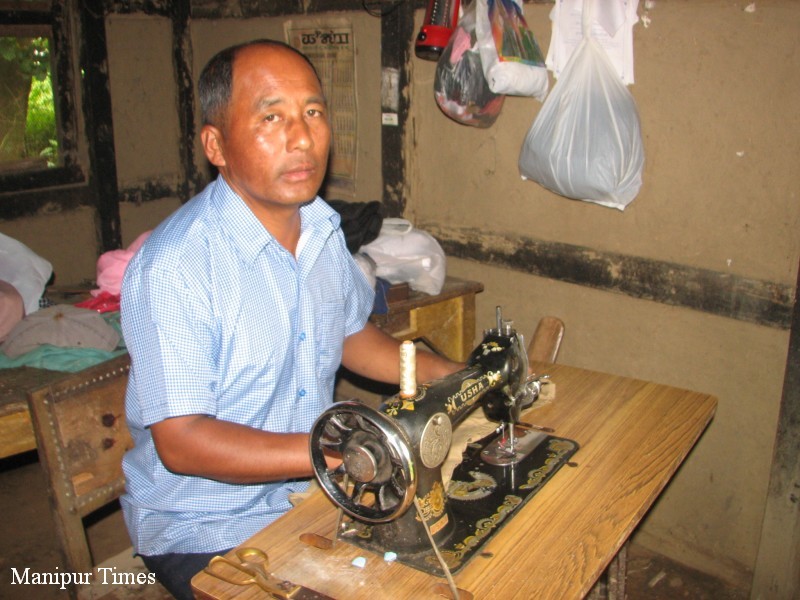 “Many educated youths of the state seem to wait for only white collar jobs rather than seeking for alternative self-employable jobs. It is a bad trend for a state like Manipur where the state government cannot afford jobs to all the educated youths. Instead of looking for only government jobs, our youths need to come out as a bold entrepreneur. When they cultivate work culture, money will come to them automatically and the present issue of unemployment problem in the state will be minimised to a great extent. Our youths need to remind the saying ‘a drop of water makes a mighty ocean’. For me, my tailoring centre has been a boon to me as it now gives me a good turnover with which I can manage my family without much trouble. I am still gratefull to CVTC for giving my way of living at the initial stage.”

In a recent interaction with Manipur Times, Heikham Ibochoubi, a tailoring master and Proprietor of Ibochoubi Dresses shares his observation.

Heikham Ibochoubi Singh, 52 years, is the second son among seven siblings born to Heikham Amu Singh and Heikham Ongbi Pishak Devi from Keirao Makha Leikai. His parents were farmers. Since his childhood days, Ibochoubi is a hard working person who adopts great patience and smiling face.

He studied from class I to V in Keirao Social Primary School located at Keirao Bitra, Imphal East and passed Matriculation from Langdum High School. After passing Matriculation in 1979, he could not continue his further studies due to financial problems in the family.

Incidentally, he joined a nine months course on tailoring organised by Citizens Volunteers Training Centre, CVTC located at Keirao Bitra, an NGO sponsored by German government. He learnt the knowledge of tailoring under the guidance of the Project Manager Y Deven Singh. The instructors of the centre were Loitongbam Shamu of Angtha and S Ibocha Singh of Yairipok. During the training, he got a stipend of Rs30 per month. After completion of the tailoring course, five tailoring machines were given to him by CVCT. Besides this, a workshed for tailoring was also constructed for him under the financial assistance of CVTC. A sum of  Rs5000 was also sanctioned to him to help him start his tailoring business on full subsidy basis.

“The credit for my success in tailoring business goes to the then authority concerned of CVTCwithout whose help I could not be successful in this business. I am still grateful to them for their generous help”, Ibochoubi said.

At present, Ibochoubi’s tailoring centre charges Rs200 for tailoring a trouser and Rs150 for shirts. He makes various ladies dress items too. Besides making various designs of dresses, Ibochoubi Dresses is providing basic training course on tailoring to many students who love this profession. So far, he has trained more than 100 students. Some of Ibochoubi’s students have successfully started their own tailoring houses. His tailoring house can earn Rs20,000 to Rs30,000 a month, Ibochoubi said.

Around 10 years back, his monthly turnover was higher than that of the present. As the market is now dominated by various readymade items of trousers, shirts etc, the business growth of almost all the tailoring houses seem to slow down. Costumers too prefer those readymade items as they do not like to waste time for tailoring their dresses.

Ibochoubi is a hard working man. Besides earning money from his tailoring business, he not only earns extra income from agriculture farming but also runs a beautiful garden at his residence. Many varieties of vegetables, flowers and useful medicinal plants are also grown in the garden. During his free time, Ibochoubi also takes part in many social works for his locality. During his life time, he has done many development and welfare works for his village as the secretery of Youth Development Centre Club, Keirao Bitra from 1980 to 1989. In 1989, he got married with Heikham Ongbi Shanti Devi and he has now two sons and one daughter. From 1990 to 2000 he also became the secretery of Nongpok Ningthou Panthoibi Development Committee. He is now working as a local secretary of Communist Party of India, CPI, Keirao Local Council.

With the income received from his tailoring house, he is maintaining his family and expenses for the education of his children without much trouble.

“Nowadays, only a few educated youths get white collar jobs. I was running after government jobs many times but I could not get it because of bad luck and lack of money to bribe. But life had to go on doing something. I decided to make living through tailoring sensing its potential of good business growth and profit. Food, clothing and shelter are the needs of life. As long as the man exists, man will need these three things. Considering tailoring business would be a long lasting business with a good turnover, I opted for this particular profession. Our youths, instead of wasting time, need to find any job opportunities of their best choice. Expansion of the present tailoring house is my dream which cannot be realised due to financial shortage. I am satisfied with my present profession. For earning I do not depend on others and I am the master of my own business. It is that kind of job ‘the more work hard, the more money’”.