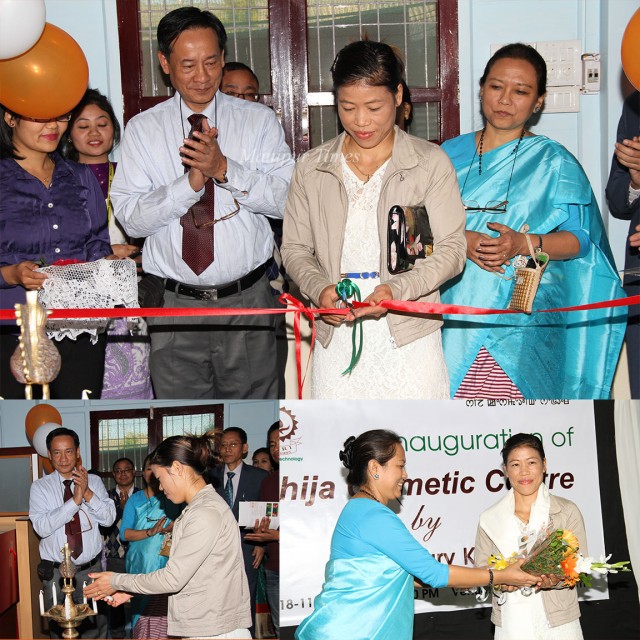 In yet another milestone towards medical tourism of Manipur, global icon of health, strength and beauty, Ms. M.C Mary Kom, inaugurated the Shija Cosmetic Centre at Shija Hospitals and Research Institute (SHRI), HealthCity, Langol on 18th November 2014. In the opening remarks, Dr.Jugindra S, Director-Medical Services of SHRI, highlighted the avenues of Medical Value tourism in today’s world. It is estimated that more than 10,000 patients are going outside Manipur for medical reasons such as Cancer, Heart, Organ transplantation, Joint replacement, Infertility treatment and Cosmetic Surgery, said he. More than 500 crore is spent for the treatment, which does not include the cost of travelling, lodging, man-hour loss and other expenses. The inconveniences and the trouble faced by the people of the state are disheartening, he said. He expressed that introduction of the Shija Cosmetic Centre, a dedicated unit for Cosmetic Surgery, Dermatology and Dentistry, is in the hope of not only saving the State’s exchequer but also to attract patients from other states and countries. He expressed his heartfelt gratitude, on behalf of SHRI, to Magnificent Mary for launching the Centre.

Mary Kom, Chief Guest of the function, thanked the management of SHRI for remembering her on such occasion. She appreciated the efforts of the management for continuously bringing facilities to the state which were not available. She also agreed with the general belief that almost everyone wants to enhance the way they look She encouraged the Shija team on all its ventures and expressed her high regard for the organization. She concluded with best wishes for all futures endeavors of Shija. She was taken for a guided tour and briefed about the facilities and equipments of the centre.

Dr.Kh Palin, Chairman cum Managing Director of SHRI and a forerunner in Cosmetic Surgery, expressed that the centre is meant for caring for the Mind, Body and Spirit. Cosmetic surgery is no longer a monopoly for the rich and famous, it is available everywhere and affordable. The cosmetic facilities which were confined to Hollywood and Bollywood are now accessible by everyone in the region. He shared with the gathering his firm belief that “Everybody can live longer and look younger”. In the beginning of 20th century, average human lifespan was 20 years only and now it has touches 70 years in India, 80 years in Japan and other developed countries. He spoke of the close relationship between mind and body. He highlighted the importance of meditation and its effect on the body through molecular changes inside the body. A combination of life style changes and meditation creates possibilities of reversing the age. He concluded, expressing his deepest gratitude, that the presence of a star like MC Mary Kom in the inauguration of Shija Cosmetic Centre will make Manipur recognized internationally as one of the destinations of cosmetic care.

Subsequently, in celebration of Christmas and Sangai Festival, the management has announced a Cosmetic Surgery Carnival from 19th November’2014 to 2nd December’2014 where free consultation for cosmetic surgery will be provided and 15% discount will be given for all procedures performed before 31st December’2014.