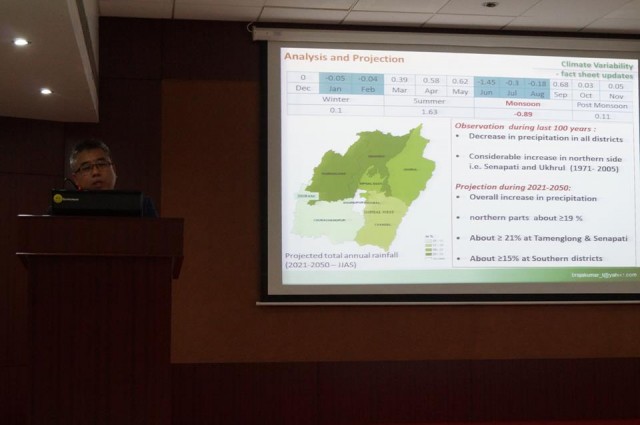 Climate change and other environmental issues in Manipur were thoroughly discussed at an interactive session organized by Manipur Nature Society at the conference Hall of Babina Diagnostics Society, Soibam Leikai.

Issues on dwindling wetland, decrease in forest area via increase in population, climate change in the last 80 years, changing pattern of rainfall, and many other topics with statistical datas were presented by Dr Brajakumar. He also focus on adaptation and mitigation approach with the changing climate.

Many environment scholars shared their opinion during the interactive session.

Conserving water was also the main highlight of the interactive session. Protecting Forest from wild fire as a means of conserving forest and other issues like copping up with the menace of chopping down kilometers of forest area for poppy cultivation was also brought up by the participating delegates.

Ningthem Pukhri was dug by war captives of Burma taking three months time and we need to dig 200 such ponds with the modern technology to conserve water says one of the delegate. He continued that the king of Manipur at one point of time keep a record of trees by marking on its bark when the trees attend a size and thus the Manipuri people are environmentally conscious people. We need to follow the trend he continued.

Dr. Brajakumar also expressed that Manipur Government has come up with an action plan to combat climate change and he also delivered that the public has a great role to play. Besides he also urge on the need of many capacity building measures.

The interactive session was organized with earnest efforts from Salam Rajesh of Manipur Nature Society.