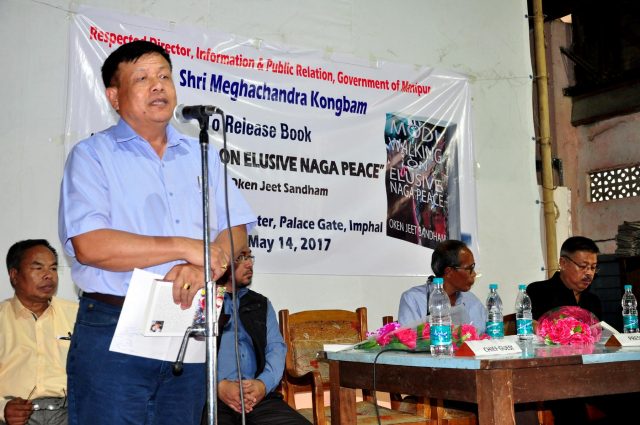 Shri Meghachandra Kongbam, Director, IPR, in his speech as Chief Guest, he said that writing the issues of the north eastern states by ourselves may enable others to understand our issues thoroughly instead of outsiders who wrote about the issues without knowing the base of the issues. Quoting former Governor S S Sidhu’s speech in N-E Investors’ Meet in Delhi, “If you want to invest in north eastern state you should know the north eastern region first and you will succeed in investing in the region”, he said, “We need to know our people and make our people known to other parts of the country”.

Highlighting the contributions made by prominent journalists of the north-eastern states about the issues occurring in the region, he appealed to the journalist community to write books, after retirement, to share experiences gained through their works, for the future generation. Expressing his word of appreciation for the work done by the author, he wished him success in his future endeavour.

President of the function, Shri Ahongsangbam Mobi Singh, President, Editors’ Guild of Manipur, appreciating the work done by a journalist who was born and brought up in the soil of Manipur but settled in Nagaland, called on the journalist of the state to penned their experiences in the form of a travelogue or book after retirement to share their knowledge to the future generation even though writing a book is a difficult task as it needs monetary and physical inputs.

Shri Irengbam Arun, Resident Editor, Imphal Free Press, giving his speech as Guest of Honour, said that the author knows the sentiment of the people of both the States and is perfectly placed to write such a book.
Author Oken Jeet Sandham said that, he was known only for his contribution in the field of sports in Manipur and Nagaland rather as an author. Knowing and writing is better than listening and writing and so he started writing about the issues of the north eastern region mainly the Naga-Manipur issue to make the people understand the situation of the N-E people, he added.(DIPR)