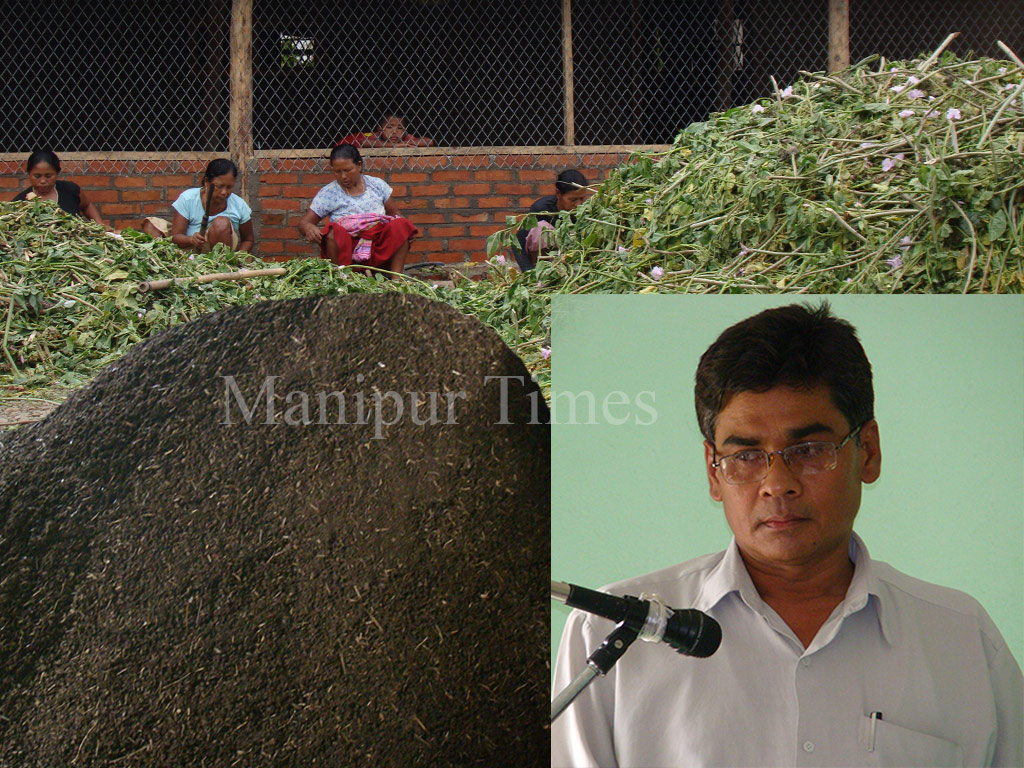 Kumar works starting his day early to travel nearly 25 km from home to oversee his black-gold field, with a size of around one acre at Nongdum of Imphal East District, and returns home late evening after work. His vision is to conquer and change the indirect and adverse harmful effects, caused by the usage, of chemical fertilisers by providing an opposite of it, called Vermi-Compost (Black-Gold), made from the droppings of earthworms.

While having an exclusive talk with Manipur Times, at his house near Governor Road, Imphal, he elaborated, “Vermi means an earthworm, in Japanese and compost means manure which is used as fertilizer for plants”

He said, Vermi-Compost is a process of composting using earthworms, and their droppings is what we used as compost. Explaining further he said that this compost contains water-soluble nutrients which are an excellent, nutrients-rich organic fertilizer and soil conditioner that has reduced levels of contaminants and a higher saturation of nutrients that other organic fertilizer and manures.

He stated, “It’s 10 times better than any other organic fertilizer and minerals, though it also belong to the category of organic manure.” He then added, “Vermi is opposite to chemical fertilizer, as its usagedoesn’t cause harmful effects on soil, plants, environment and humans. In our parlance, we call it ‘Black-Gold’ because of its high quality and attributions that this compost possesses”.

Vermi-Compost Vs Other Chemical fertilizers:

He asserts that vermi-compost are far better than any other fertilizers available in the market, he says this compost is not only economical and highly beneficial to plants but also makes the soil fertile. He further said this compost improves soil aeration and its water holding capacity which enhances the plant’s germination, growth, and helps yield more crops.

It’s commonly known to people that most non-organic fertilizer are made from petroleum products. Plants absorb the fertilizer directly and in turn the plant may have an unnatural growth without reaching its maturity period which may also exposes to the attack of insects, bacteria and viruses which would again demand the use of insecticide to prevent such attack to safe the crops.

He further maintained that repeated application of chemical fertilizers degrades the soil fertility while vermi-compost enhances the fertility after its few consecutive application.  He further said this compost can be used in any plant variety and favourable for fish farms.

Highlighting its benefits he said for those lands unaffected or unharmed by chemical fertilizers, only 80 kg is sufficient per acre at first and then for the later consecutive and following applications the quantity to be decreases radically. But chemical and other fertilizers needs to increase its quantity for each following years, he maintained.

Kumar’s Journey of Past, Present & Future:

Ningthoujam Kumar Mangang is now 56-years old and a philosophy graduate from DM College. He’s from Thangmeiband College gate but currently lives in a rental house, at Governor Road, Imphal, with his family. And before setting up his Vermi-Compost farm, he taught in a government high school and but took voluntary retirement thinking teaching profession is not suited for him.

But, the enterprising mind of this 56-years old Kumar began its exploration for a replacement to chemical fertilizers, which are especially pricey in the state, and an alternative for it, to avert its negative impact on plants, soils and human health.

He learnt about VermiCompost from the internet and underwent training as well.

He started his training in October, 2011 from a training program in Pusa, New Delhi, which is a government research centre for Agriculture and Horticulture. He later specialised on the subject by mobilising knowledge from various sources and institutes where he said, “after Pusa, I went for a month in Saharanpur which is private sector, then in Ghaziabad and then to Coimbatore, later to Mysore to know and explore more about Vermi Composting.”

After gaining knowledge through series of trainings, Kumar imported one- lakh earthworm from France during May, 2012 And, later during December, 2012 he established his own vermi-composting farm, at Nongdum of Imphal east of Manipur,  called ‘Natural Resources Development Foundation’ which later became an NGO.  Kumar further said that his farm have now more that 75 lakhs earthworms, which breeds within a span of one and half years, which produces nearly 360 metric tons of compost a year.

When Manipur Times enquires about the places where he markets his compost, he said, “For now, I supply mostly to governments agencies like ICAR, Lamphel; Horticulture Department; Manipur Development Society; few site of Krishi Vigyan Kendra (KVK); state individual farmers”. He also said that he exports some measure amount of his compost to Mizoram and Meghalaya farm, occasionally but his main focus and attention is to help meets the increasing demands of state not export.

Kumar finds no challenges in the course of journey, where he said to Manipur Times that he only got encouragement and motivation from people, and now he has team-up with 9 like-minded people to broaden the vermi-composting farms to 10 different places of state. He stated to Manipur Times, “now it’s in the process and about to inaugurate at Umathel; Kacking Khunou; Yaripok; Kumbi; Pukhaou; Pungdongbam etc.” which he thinks that this upcoming farms would helps bridge the demands and supply gaps.

Highlighting the farm’s achievement, he said, “Ministry of Agriculture, Delhi have seen and being satisfied with our achievement, and they accredited our farm to open a training centre on vermi-composting for Imphal East in which a team from Delhi have asses our farm and its infrastructures”. He stated, “the training session may initiate from January or  February of this upcoming years, in which interested farmers would be trained with stipend provision, and they will be provided support and aid to established their own vermi-composting centres.”