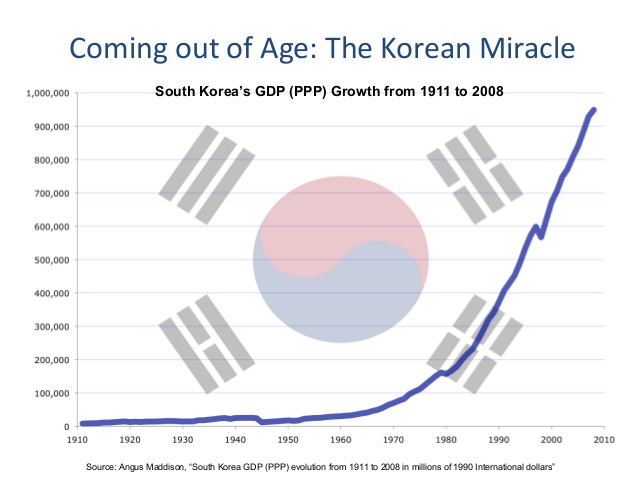 We have lots of things to learn from South Korea other than fashions and foods. We got independent along with them and yet they manage to grow and we remain stunned. After the Korean War, South Korea was one of the world’s poorest countries with only $64 per capita income GDP was around $2.7 billion (same with current GDP of Manipur) Economically, in the 1960s it lagged behind the Democratic Republic of the Congo (DRC). Today S Korea is world’s leader in every sector. On June 23, 2012, South Korea is landmarked to become the 7th member of the 20-50 club (with the population surpassing 50 million and maintaining per capita income of US$20,000). The secrets behind their exponential growth are their hard work with discipline, respect and selfless sacrifices of their people to the nation. Here are some keys that they hold (source: Quota.com)

By 1940s, South Korea already had a fairly literate population by Asian standards of that time. This was partly because of Japanese occupation.

While democracy and human rights suffered, Japanese have been quite instrumental in building Korea’s infrastructure and also strongly integrated the economy with Japan. That proved to be valuable in an export game in the following decades.

How South Korea Became a Hub of Innovation

Soon after the division of the Korean Peninsula, in 1945, South Korea already had in place the building blocks for growth: an educated population, property rights, land reform that boosted productivity, and the institutions of modern capitalism.

After the war, the South Korean government took a significant step in expanding the reach of literacy to all. This eliminated illiteracy by the 1960s giving it a significant advantage compared to most Asian countries. Human capital is the foundation of a developed nation.

One of the most understated economic factors is land reforms. It is extraordinarily important for growth and peace. In India, there is a major communist revolution in the hinterland due to the lack of land reforms there. Land reform makes or breaks a nation. In Korea, key land reforms happened in late 1940s that built a significant middle class. It was partly done by the US who forced the Japanese land owners out and redistributed the property.

In Korea and Taiwan, the absence of powerful economic interests and low levels of inequality due to sweeping land reform contributed to developing meritocratic and autonomous bureaucracy, which helped to curb corruption and capture.

Literacy and land reforms are necessary, but not sufficient conditions for growth. South Korea was still poor in 1960s, until the stage 3 in growth came. In fact, it was just rubbing shoulders with North Korea until then.

Park Chung-hee forcefully took the country towards a freer market and opened up the economy. He also deepened the relationship with US and Japan. That’s where you start seeing the curve moving up. [That said, there was a little more crony capitalism than true free market there – the family owned Chaebols like Hyundai, LG and Samsung got a sizable share of government largesse that might have long term damage on growth].

This is again an understated effect. Countries that have gone through a first phase of growth will have rapidly falling population growth rate leading to the virtuous circle for a while. People focus more on career than families – leading to fewer children. In the initial few decades this is a great advantage – as people will rapidly move up in career ladder and would not have kids to slow them down. They will get richer and mobile.

Things all go well until it comes time for retirement. Then, all the things about putting career over family bites. In short, demographic shift is a one-time growth lottery that Japan and Korea used well. However, the lottery’s “high” wears off at some point and the hangovers are very severe. Japan is going through this painful process and South Korea has just started.

Constant threat from North Korea – hhis keeps South Koreans on their toes giving them no opportunity to go lax.

Lots of help from the US – at one point 60% of all investment came from the US. Of course, it doesn’t hurt to be a US ally. Foreign Economic Relations – The difference from Middle East allies of US is that South Korea did make its citizens literate, give them land and open up the economy, without which US Aid would have been ineffective.

South Korea’s growth is a combination of quick achievement of 100% literacy that started in Japanese occupation, significant land reforms that created the middle class, significant market reforms that helped the middle class trade with the world and a demographic one-time lottery. Most communist nations miss the stage 3 thus they are educated with land reforms with stunned growth. Many crony capitalist nations miss stages 1 & 2, thus they have a “free” market but without a populace that is educated and with land to make use of the market. South Korea ticked off all its boxes.