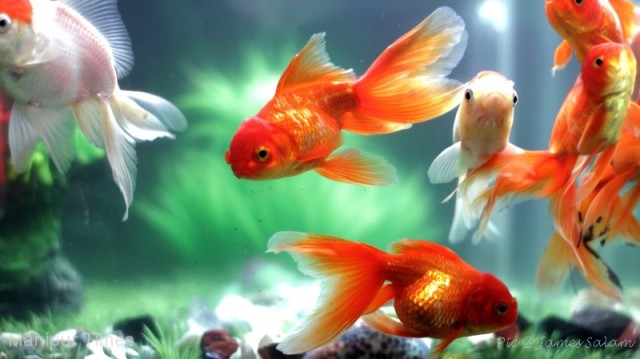 Nowadays, aquarium buffs all over the world have started adorning their aquariums with local fishes.

“Varieties of indigenous fishes are found in Manipur and these fishes possess characteristics of ornamental fishes. Meitei Ngamu is a fine example of such kind of fishes. We can take this opportunity and make use of our resources to enhance the economy of Manipur,” said Laishram Nilkumar.

During the interaction, he said that the exhibition was organised with the objectives of producing new entrepreneurs of aquarium in Manipur and promotion of Manipur Science Aquarium.

Manipur Science Aquarium was established by Manipur Science and Technology Council, Imphal with the support from Department of University and Higher Education, Government of Manipur.

At present there are 38 aquarium tanks in Manipur Science Aquarium. Out of these, 18 tanks are RCC tanks measuring 5’X3’X4’ each.

The centre is open 6 days a week from 10.30 a.m to 4 p.m. and close on Sundays. Visitors can see different varieties of indigenous or exotic fishes in this aquarium.

Nilkumar said that any fish which possess aesthetic value in its look and character can be classified as an ornamental fish. Earlier people wanted to decorate their aquariums with fishes like Gold Fish, Guppies, and Marble Molli etc. Now the trend has changed. Now the ornamental fish market has started demanding indigenous fishes.

The largest source of fish is Loktak Lake. Varieties of ornamental fishes are available in the State especially in the hill streams.

“Out of these varieties, a lot of species are yet to identify. If we want to breed them for export purposes we need to know the source, environment, food habit and population of the fish species. If so it will be very helpful while breeding the fish. If we breed and export these fishes it will help in bringing solution of unemployment in Manipur at the same time the economic condition of the State will become better”, he said.

He further said that the youth can give employment to themselves by making aquariums as well.

“After making an aquarium we need to take at least one week to treat the water. The fish will die if we nurture it without knowing the physicochemical and biological parameters of the water. An aquarium cost between the ranges starting from Rs 5,000 to Rs 30,000 in local market”, Nilkumar said.