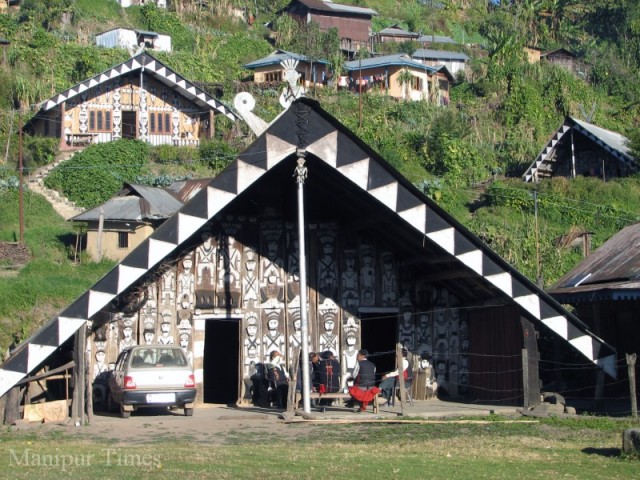 87 kilometres away from Imphalin the lofty hills of Manipur Maram a popular place has 27 major and 5 minor villages. Location wise it is divided into twoparts KaraiTalung(MathakSagei) and HingRailu (MakhaSagei).

There are more than 1000 houses in MaramKhullen hills and the population will be around 8000 says the village authorities to the group of journalists who visited Maram on a special tour organised by the Maram Students Union in the month of November 2012.

Agriculture and animal husbandry are the main source of economy of the people living in this region, however there are people doing good business and government employees.Private schools, government schools besides president award winning Don Bosco College Maram run by Christian Missionary educate the students of Maram. School and college going youths of this region seem to be quite impressive in number indicating the value and importance of education among Maram populace.

Most of the houses in Maram are built in the ancient way with unique architectural touch and they called the house styleAkajalika. Maram tribe is the only primitive tribe in India says Pungdi P Celestine, president of Maram Student Organisation.

According to a belief in 3 days’ time it is mandatoryto complete building the house of a King in Akajalika style. People from all villages under King’s jurisdiction come together to build the house of the king.

Arakatasignifying wealthis the term to feed the worker for building house as it need strength to build house. For an Arakata ceremony they sacrifice animal which is pure black in colour, portion of the meat is given to the in laws of the King.

On successful completion animal sacrifice is done for inauguration of the newly built house for wellbeing.

To the left side of the house wooden structure sitting bench with a hearth for visiting guests is kept. On certain occasions women are forbidden to sit in the room and only the man sits there. The end of the house is where they keep the kitchen.

In front of the house certain structure depicting human in warrior’s wear symbolic of head hunting is carved out of the wooden wall in the front. Bulls head and other weapon used by warriors are also depicted in the art form. In the past Maram tribes were head hunters and the number of head counts signifies the might of a warrior. The Structures in the front part of the house signifies the might of the warrior living in the house.

For the commoners to build a house in Akajalika style they have to seek permission from the King for carving out structures of the warrior and other traditional forms.

70 years old Sagongnamba present chief and titular king of all the villages inherited his status from his ancestor Kings who have administered Maram under their able leadership and is honoured by the people living in Maram.

On the role of king to the present society the system of giving judgement is still practice. There are 11 authorities under different provision including a counsel to the king for traditional administration. The counsel reports to the king on hearings even in serious cases.

The head of the clan Sudongmai’ takes part in the judgement of a verdict in traditional court.

Naked wrestling a form of indigenous game where the male population wrestle without wearing cloth is still practice in Maram, they clean and decorate the house for 2 to 3 weeks for the naked wrestling which falls in December or January. From ancient time Maram people follows lunar Calendar.

The first one to catch a live bird by hand is regarded as the luckiest boy for the year. 100 and moreboys who have crossed the age of 1and half will go out along with elders and catch bird alive on a clear sky day when the Sun is not blocked by the clouds. As soon as the first bird is caught the lucky boy will hold the bird in such a way that the head of the bird lies in open air for the whole team to touch the bird’s head and get blessed.

Before the bird catching event the boys will gather around a place and do ceremonial hunting dance with folk songs guided by the elders.

After the bird hunt is over with a minimum of three catches to as many as the team can with the last one to catch also counted as one among lucky ones. The event is followed by a traditional ceremony where the joints of the hands and legs are wired around with wigs for good blessings.

The tradition is followed till today and the bird they catch is kept by hanging on the front of the King’s Residence.

The ceremonial event falls around November or December. People who are weak or missed the hunting do not go for hunting also get blessings by touching the head of the bird.

The significance of stone in day to day life is very much there in Maram. Like they have a stone believe to be the Rain God. When there is no rainfall they offer prayer to the guarded stone. Another stone believe to be the guard of one’s property is often kept at the courtyard of a house. A day and night vigil is expected by the owner of the stone. The practice is not followed at the present time however few household maintain the same tradition.

They measure the height of the cowherd who would qualify for the profession like when a boy stand on his foot his chin has to reach a stone in higher ground which is located at a particular place of the village.

The availability of stone in abundance is a gift to the people of Maram as it is use in various purposes like in building house or foot pavements besides road making and other day to day purpose possible through materialisation of grinding or a place to sit on or wash cloth.

The God of fire and air commonly believed to have existed in the ancient time is restored in a graveyard park. It is believed that they were born in human form and have safeguarded the existence of air and fire.

Barrack River running at the foothills of Maram Hill is a big source of stone chips for the stone crushers in and around Maram moreover the river is a gift to the people who grows paddy at the plain foothills of Maram.

Maram tribes are very friendly people they keep their tradition in terms of ancient architecture, indigenous game, folk songs and annual traditional ceremonies in different aspect of life. If we go back to the past there is co-existence says Pungdi P Celestine President Maram Student’s Union in an interaction with a team of journalists. The word Maram means elder says another village authority.

The rooted nature of livelihood amongst the people of Maram Tribes of Manipur makes them feel identified and stands unique to the outsiders. Anybody visiting the place would feel the originality and upbringing of the old age practice and civilization. Of what was once we could see in the present and there lies the beauty of belongingness.