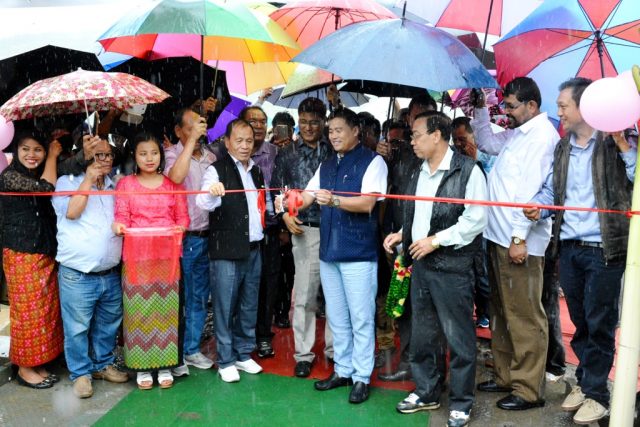 Imphal, 1st September, 2017 (DIPR): Rural Development and Panchayati Raj Minister Shri Thongam Biswajit Singh today inaugurated the Makokching Iril River Bailey Bridge spanning 190 feet over the Iril River and said the bridge has been completed two months ahead of its stipulated date of completion which is in October.

Dedicating the bridge to the people of the area in the presence of local MLA Shri Yamthong Haokip, Minister Shri Biswajit Singh also assured improvement of the road connecting Saikul Bazar to Makokching via the bailey bridge.

Addressing a formal function at the Makokching Baptist Church Minister Shri Biswajit Singh also explained at length about the scheme and said the PMGSY was introduced on December 25, 2000 by the then Prime Minister of India Atal Bihari Vajpayee.

Clarifying to complaints of some villages in the interior part of the State being left out from the scheme, the Minister explained that earlier the scheme cannot cover villages or habitations which has less than 250 population, however, following pressures from certain State governments including from the Manipur government to include habitations with 100-249 populations under the scheme, the Centre is likely to approve the same.

Meanwhile, replying to the memorandum submitted by Kuki Inpi and KSO, Saikul, Sadar Hills East, Kangpokpi District, Manipur, the Minister assured to take up widening and black topping of the Saikul Bazar to Makokching Bailey Bridge to Makokching Village road under the Public Works Department.

On the demand for increase in number of transformers in Saikul, he said it is not an issue and urged the concerned to submit a formal application in this regard. Regarding demand for installation of 80 solar lamps in Saikul and Molkon Bazar areas, the Minister explained that there is no provision of the same under MANIREDA; however, Grid Connected Solar Plants could be installed. He continued the State government will bear 70 percent of the cost with the local authority bearing 30 percent.

He continued the concerned engineers have been instructed to look into the issue regarding improvement of the road stretch constructed under PMGSY from Makokching to Dolaithabi Barrage and that the stage I of the construction of link road from Holbung to Tusam under PMGSY via H.Jangnom, Maojang, Ng.Phainom, Songphelkholen has already been completed.

Minister Shri Biswajit Singh continued that the Centre has implemented more than 316 schemes for the welfare of the people.

Explaining the benefits of the welfare schemes including opening of Jan Dhan Joyana, Pradhan Mantri Awas Yojana-Gramin (PMAY-G), Unnat Jeevan by Affordable LEDs and Appliances for all (UJALA), Ujjwala, KISAN SAMPADA, he also urged the youth to conduct awareness campaigns to make the people aware of the provisions of the schemes.

Lauding the efforts of the department in the early completion of the construction of the bridge, the Minister announced that firms and contractors who maintain quality and complete their projects six months or three months ahead of the stipulated time will be awarded financial incentives.

The inaugural function was also attended by 17 Makokching DCC Shri Thongjalun Mate and others. (DIPR)