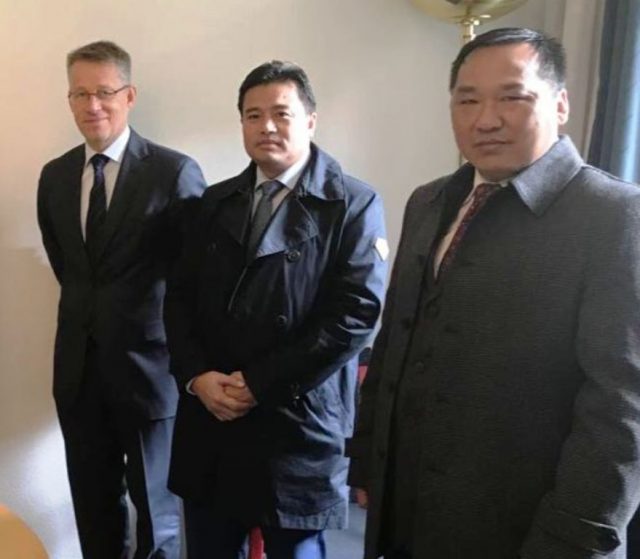 Imphal, October 14, 2017 (DIPR): Textiles, Commerce and Industry Minister Shri Thongam Biswajit Singh met Director General of Foreign Trade, Sweden Shri Oscar Strentorm and highlighted Manipur’s potential in the food-based Agri-Horti and tourism sectors.
Minister Biswajit, who is in Sweden to participate in the Make In India Conclave at Stockholm, Sweden, met Oscar Strentorm at the Ministry of Foreign Affairs, Gustav Adolfs Torg 1, Stockholm, Sweden at 2 a.m., Saturday (IST).
During the interaction, Minister Biswajit, accompanied by Textiles, Commerce and Industry Principal Secretary, Government of Manipur Shri P. Vaiphei, highlighted the large scale availability of organic raw materials for establishment of food-based Agri-Horti Industries in the State.
Further emphasising on the availability of raw materials in the State, the Minister highlighted, that bamboo which is found in abundance in the State could be used as a raw material for production of furniture. The Minister also spoke of the natural beauty of the State expressing that the State’s beauty could attract investors in the tourism and hospitality sector.
He also talked of exploring markets for handloom and handicraft products of the State. Minister Biswajit further promoted the State talking about the unique cultures of the State, Sangai, Siroy Lily, Loktak Lake among others.
Lauding Sweden’s development in various fields including road infrastructure, technology, etc, Minister Biswajit also extended an invitation to the Swedish government to visit Manipur and explore its potentials.
He further extended an invitation to the Swedish Government to send delegates including officials of the Swedish government and successful business persons of the country to attend a Business Summit in Imphal to be organised under the initiative of the Chief Minister of Manipur to promote trade and commerce in the State.