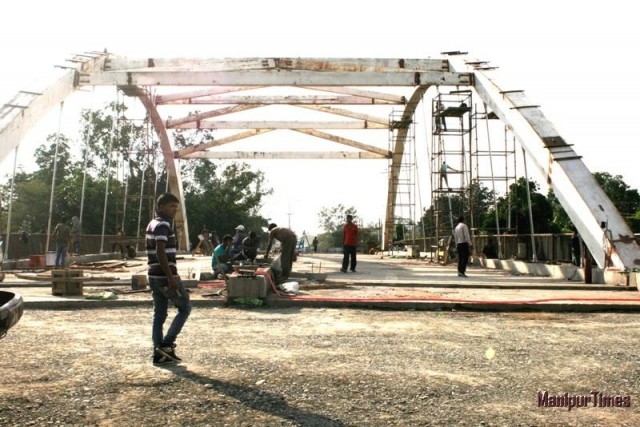 IMPHAL, Nov 10: Construction Work of the new Sanjenthong bridge is now in full swing as the Manipur government is preparing to inaugurate the much awaited bridge ahead of the Manipur Sangai Festival slated to be held from November 21 to Nov 30.

Sanjenthong, the historic bridge over Imphal River connects Imphal east and west and it was constructed in the 1960s. The bridge was dismantled on April 29, 2014 for construction of a new four-lane bridge at an estimated cost of about Rs.30 crore under the State Public Works Department.

Dismantle of the old bridge and construction of a modern, broader was necessitated as it could no longer meet the ever increasing traffic volume.

After the bridge was dismantled, people of the state have been facing severe inconveniences and taking the New Thumbuthong, Old Thumbuthong and Minuthong as alternative routes to reach Imphal city.

Now, it is almost likely that Manipur Government would be able to hand over the bridge to the people ahead of the Sangai festival as construction of the bridge have been almost completed. Repairing of the approach roads is underway