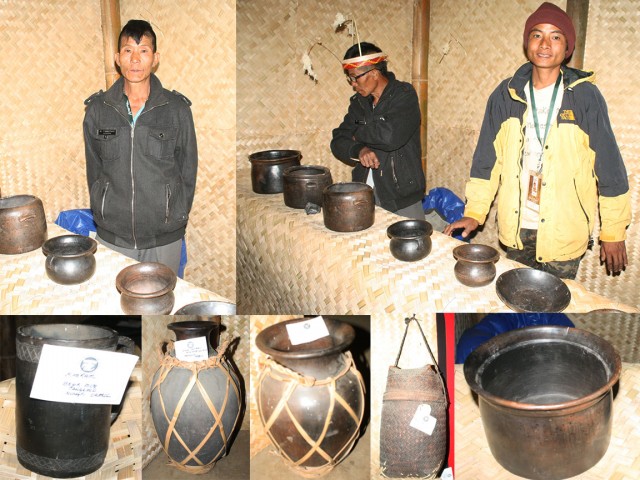 Most of the villages of Manipur have distinct features in their pottery, each determined by its colours and designs. It is the Nungbi village though that has taken the lead outside the state and made a mark with its black earthenware crafted by Tangkhul tribe who reside in Nungbi village.
The technique of this art is said to be handed down from the Neolithic period. A unique feature of this craft is that it is crafted without a potter’s wheel.
Clay and black rock are the two main ingredients used for this craft. Basically a male-oriented handicraft, this craft requires a high degree of skill and attention.
K Timothy, 58 years, son of Kasarming is one of the pioneer Pottery Artisans from Nungbi Khullen in Ukhrul district who has bagged state award in Pottery craft conferred by the state Commerce and Industry Department in 2009.
He has been in the craft of making black pottery for about 30 years. He learned the art of pottery craft from one Babu of Thongjao village in Thoubal district whom he met while the latter came to the village as pottery instructor.
He makes cooker, water pot (Chamkha in Tangkhul dialect), Phampai (cooker), Tengot (Kokthi), cup, water pot (Khoram) etc.
His pottery products are supplied to Imphal, Nagaland, Bangalore and other parts of the country. The process of making black pottery is labourious.
The potters deftly mould an amazing range of earthenware in various shapes and sizes. The baked pots acquire a black colour and look almost like metal.
This pottery, traditionally meant for local use in the village and in neighbouring villages has attained an important place in handicraft products outside Manipur.
It is generally believed that cooking in this pottery enhances the taste of the food as compared to other pots and pans.
In the olden days, pot making was confined to as a household activity with women members being the chief creators, while the men brought the material. With the passage of time and industrialisation, black pottery gradually got replaced by other metallic utensils.