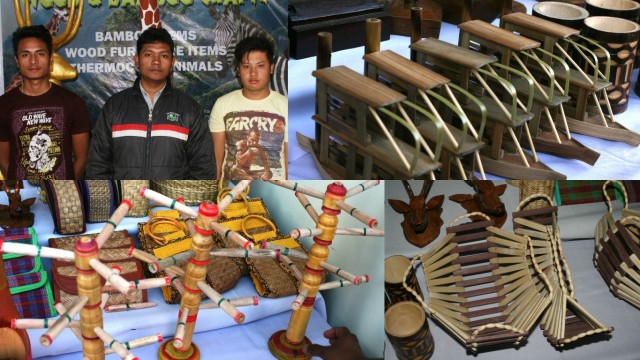 Khoisnam Borish Singh, (21) son of Khoisnam Basanta of Nongmeibung, Imphal East is a budding Artisan who makes various attractive craft items out of shabby and waste materials like cardboard, newspapers, coconut. He makes toy aeroplanes, jeep, Tank, models of famous Sangai (brow antlered deer), Giraffe, Zebra with shabby cardboards, newspapers, Artisan Borish is a BA student at Maharaja Bodhchandra College, Palace Compound. Since his childhood, he had a great passion for making his own toys like aeroplane, models of animals from any available worn out materials. Driven by this passion, he was absorbed into the craft right from attaining 10 years of age. He was also highly motivated by his father who happened to be a Bamboo craftsperson. Borish is the eldest son among three siblings of 2 sons and one daughter born to Khoisnam Basanta. He along with his brother showcases the various craft items artistically created by himself at his home in the ongoing Manipur Sangai festival 2015. Apart from making decorative craft items from shabby and worn out cardboards, he is also well versed in making other craft items of Cane and bamboo. He makes ships, model of Sangai, hair cliffs for ladies, hangers for bangles, Pen stands and carry bags etc from cane and bamboo.