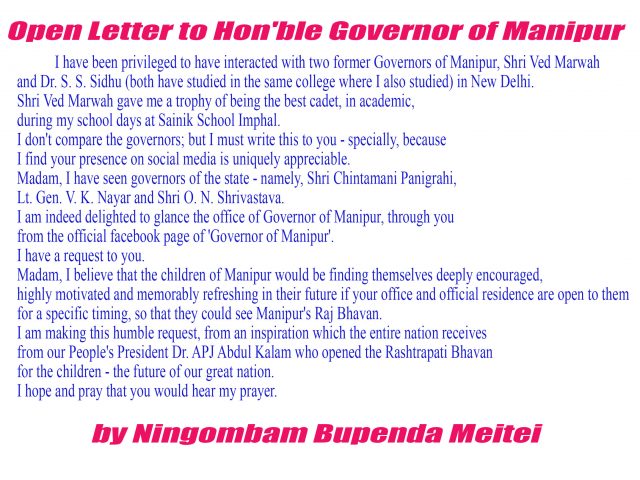 Mrs. Najma Heptulla,
Her Excellency,
the Governor of Manipur

I have been privileged to have interacted with two former Governors of Manipur, Shri Ved Marwah and Dr. S. S. Sidhu (both have studied in the same college where I also studied) in New Delhi. Shri Ved Marwah gave me a trophy of being the best cadet, in academic, during my school days at Sainik School Imphal.

I don’t compare the governors; but I must write this to you – specially, because I find your presence on social media is uniquely appreciable.

I have a request to you.

Madam, I believe that the children of Manipur would be finding themselves deeply encouraged, highly motivated and memorably refreshing in their future if your office and official residence are open to them for a specific timing, so that they could see Manipur’s Raj Bhavan.

I am making this humble request, from an inspiration which the entire nation receives from our People’s President Dr. APJ Abdul Kalam who opened the Rashtrapati Bhavan for the children – the future of our great nation.
I hope and pray that you would hear my prayer.

Thanking you.
With warm regards,
Yours sincerely,
Ningombam Bupenda Meitei