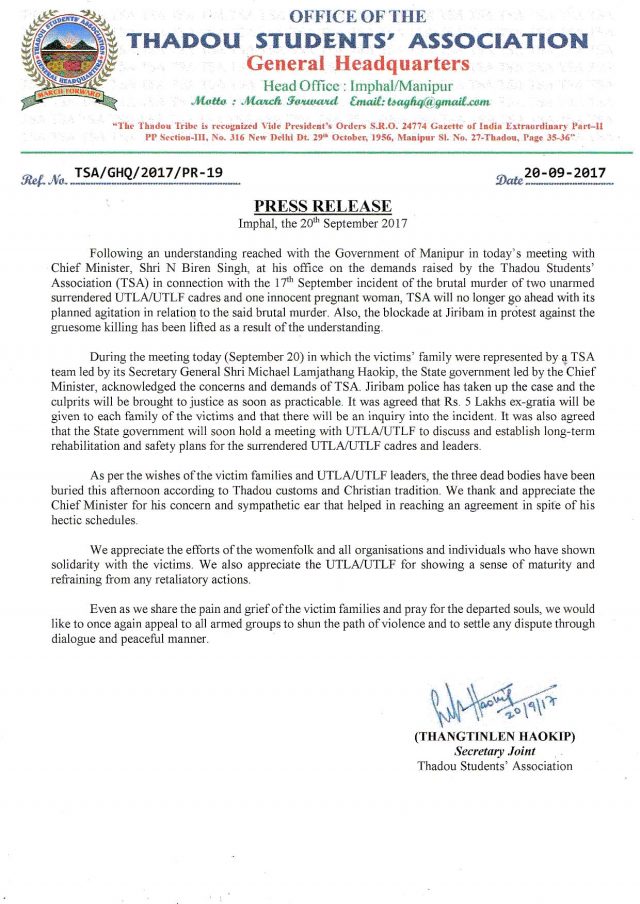 Following an understanding reached with the Government of Manipur in today’s meeting with Chief Minister, Shri N Biren Singh, at his office on the demands raised by the Thadou Students’ Association (TSA) in connection with the 17th September incident of the brutal murder of two unarmed surrendered UTLA/UTLF cadres and one innocent pregnant woman, TSA will no longer go ahead with its planned agitation in relation to the said brutal murder. Also, the blockade at Jiribam in protest against the gruesome killing has been lifted as a result of the understanding.

During the meeting today (September 20) in which the victims’ family were represented by a TSA team led by its Secretary General Shri Michael Lamjathang Haokip, the State government led by the Chief Minister, acknowledged the concerns and demands of TSA. Jiribam police has taken up the case and the culprits will be brought to justice as soon as practicable. It was agreed that Rs. 5 Lakhs ex-gratia will be given to each family of the victims and that there will be an inquiry into the incident. It was also agreed that the State government will soon hold a meeting with UTLA/UTLF to discuss and establish long-term rehabilitation and safety plans for the surrendered UTLA/UTLF cadres and leaders.

As per the wishes of the victim families and UTLA/UTLF leaders, the three dead bodies have been buried this afternoon according to Thadou customs and Christian tradition. We thank and appreciate the Chief Minister for his concern and sympathetic ear that helped in reaching an agreement in spite of his hectic schedules.

We appreciate the efforts of the womenfolk and all organisations and individuals who have shown solidarity with the victims. We also appreciate the UTLA/UTLF for showing a sense of maturity and refraining from any retaliatory actions.

Even as we share the pain and grief of the victim families and pray for the departed souls, we would like to once again appeal to all armed groups to shun the path of violence and to settle any dispute through dialogue and peaceful manner.