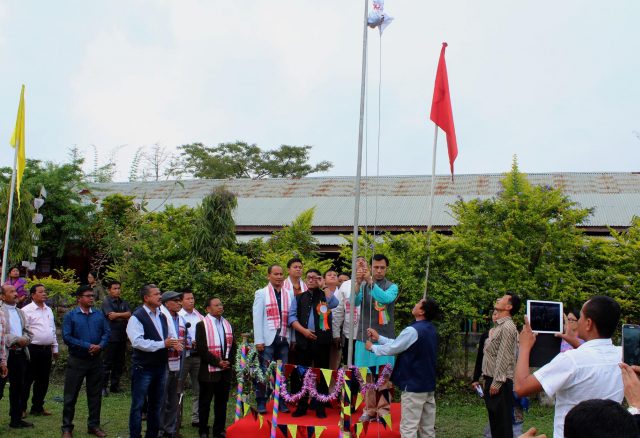 Imphal, 21st April, 2017 (DIPR): Education Minister Shri Th. Radheshyam Singh said Education Department has numerous problems but addressing the most urgent issue specially the inadequacy/insufficiency of teachers not meeting the standard Pupil Teacher Ratio (PTR) in government schools is the first and foremost task to be solved. He was speaking to the media persons while going for a surprise inspection in the government schools located in and around Imphal city. The official examination of the schools was carried out in six schools – The Yurembam Govt. High School, Kwakeithel Girl’s High School, Gulap Higher Secondary School, Mekola, Kumari High School, Hiyangthang, Heirangoi Girl’s High School, and The Irilbung High School.

In the visit, to schools the Minister said that the number of teachers in most of the schools of Imphal area has outnumbered the students and vice versa compared to the schools of the far flung places of the state. Elaborating on the frequent inspections being carried out recently, the Minister said there are certain steps being examined to rationalise the teachers so as to bring/maintain Pupil Teacher Ratio in the government schools of the state.  Calling upon the teachers to think for the welfare of the students the Minister requested the teachers to render cooperation and serve their duty whenever and wherever posted in the state.

The Minister emphasising on the need to utilise the available resources in the best way he said certain workshops and brainstorming has been organised to motivate the teachers to improve the education system in a positive way. He further said everything in the government school has been provided on free of cost but still there is a need to improve and look into the prevailing condition of the education system to amend for better future of the students and schools.

In today’s visit the inspection team enquired about the regularities and punctuality of teachers in the schools, the unavailability of teaching aids, less numbers of students attending the school, their subjects, the mid day meals and daily necessary required study materials of the students. The minister was not satisfied with the prevailing conditions of the school.

In the sports meet the Education Minister said games and sports is a must for healthy development of body and mind. He further said for a better future of the students, guidance from parents, teachers and society is essential and that the teachers should regard their students as their own children and to make sacrifices from their end. (DIPR)