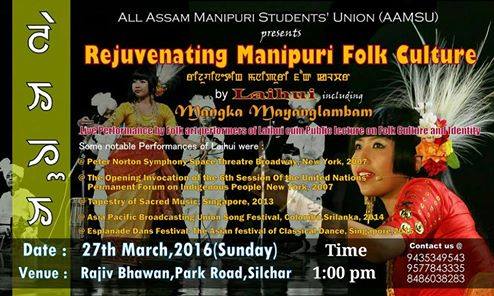 Rich and diverse cultural traditions have been inseparable aspects of life and identities of the indigenous communities in North East of India. Folk art traditions and practices are not only linked to their natural environment but also critical to preservation of distinctive cultural identity.

Manipuri communities in NorthEast of India is known for its rich folk traditions. However, Manipuri Community,living outside Manipur including those in Assam, seems to be fast losing their folk culture.

Thus, The Manipuri Sahitya Parishad Assam, Kamrup District Committee under the Title “Rejuvenating Manipuri Folk Culture” has taken up initiatives for organising lecture, Consultation and performance events with the following obcetives :
i) Preservation and propagation of indigenous folk performing arts through performances.
ii) Prepare strategies for preservation and propagation of Indigenous folk performing arts and culture.
With the objectives mentioned above, MSPA, Kamrup District Committee, invited folk art performers of “LAIHUI” including Mangka Mayanglambam from Manipur to perform at various locations in Assam. The proposed location includes –