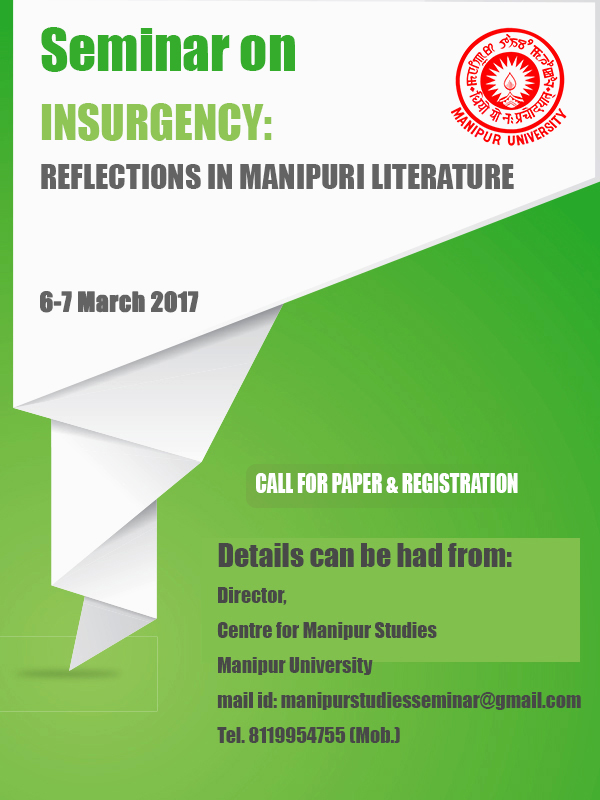 Manipur had witnessed insurgent armed conflict between non-state and state actors with the sprouting of self determination movements in the late 1960s. It led to the rampant human rights violation and abuses.  At present, Manipur has almost a number of half a century armed insurgent outfits espousing different objectives some incompatible and in collision course with the other. Just to cite an example, the ‘Kukiland’ demanded by the Kuki outfits include a sizeable portion of the territory which the NSCN-IM led Nagas would like to see some day as part of their aspired ‘Nagalim’. Even among the Chin Kuki Mizo or otherwise Zomi (CHIKIMZ) insurgent outfits, there were many which do not complied with the idea of Kukiland and espoused for a counter homeland. And also the state had witnessed splintering of armed groups and factional infighting with large scale casualties cutting across community lines. With the major Naga outfits and most of the CHIKIMZ outfits either already in peace talk or the ceasefire, it is mostly the Meitei outfits (espousing the objective of united Manipur as opposed to the idea of fragmenting the age-old state’s boundary for ‘Naga nation’, Kukiland, Zomiland or for any other exclusive ethnic homeland) which is still eluding the offer for peace talks and ceasefire.  Thus, the insurgency induced conflict situation in which Manipur was caught in is varied and voluminous as it is not just one clear cut conflict but conflicts of different kind and in its multiple.

Against the given backdrop where insurgency has resulted to serious contemporary social turmoil, this seminar primarily intends to capture the insurgency engendered issues of the resistance and dissent, nostalgia for the glorious past, the present day turmoil, the hope for better future and harmonious inter and intra community relations as documented and portrayed in Manipuri literature in the forms of novels, short stories, poems and plays. It is hoped, this will be an enabling exercise in capturing both the manifest and the latent glimpse of the present day social turmoil through the eyes of the creative writers and litterateurs.

Sub-Themes are: Polemics and perspectives; Portrayal of combatants and non-combatants; Inter and Intra Community Relations and Insurgency; Horror, Healing and Hope; and related others.

Contributors are requested to follow the ordering in sequence as – Title of the Paper, Name of the author/authors, Designation, Institutional  affiliation, contact details including mobile number, Email Id, Abstract, Keywords (not more than 07), and the body of full paper at the end. Medium of language for abstract and full paper is English only. Last date of Abstract and full paper submission is respectively 20 February 2017 and 1 March 2017. Registration Fee is respectively Rs. 500 (Rupees Five Hundred)/- for Students/Research Scholars and Rs. 800 (eight hundred)/- for others.