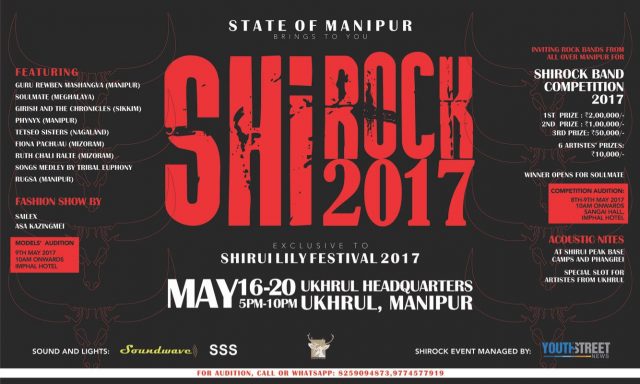 ShiRock 2017 is an exclusive entertainment event, a part of Shirui Lily Festival 2017 to be held in Ukhrul, Manipur. This will be one of the biggest events that will feature Rock Bands and Solo Artistes’ performances from all over the northeast India.

ShiRock 2017 also features Rock Bands competition from all over Manipur. Auditions for the Competition starts on 8th May 2016 at Imphal Hotel from 10 am onwards.

Apart from the above, it comprises an attractive Fashion Parade by renowned fashion designers, Sailex and Asa Kazingmei, belonging to the state. Camping and acoustic nights are major attractions of the event as well; along with varied food stalls.

It will be an amazing mega event to witness Manipur’s Ukhrul rich culture, awesome music, fun adventure and yummylicious food.

ShiRock 2017 is a part of Shirui Lily festival organised by the State of Manipur, supported by Manipur Tourism and ShiRock event managed by Youth Street News and Events.