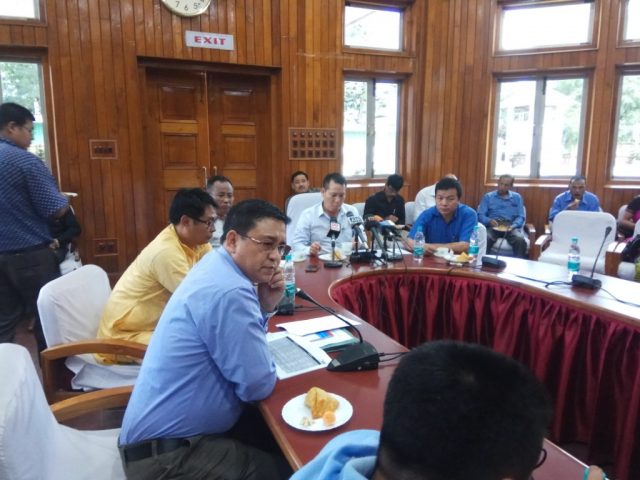 Imphal, September 29, 2017 (DIPR): Conveying heartiest congratulations to the eight footballers from the State who made the cut in the Indian squad for FIFA U-17 World Cup, State’s Youth Affairs and Sports Minister Shri Letpao Haokip wished them and the Indian team all success in their World Cup campaign.

“Really it is very heartening that eight boys from Manipur are representing the country in the U-17 FIFA World Cup. I wish them the best of luck. I also thank the players for their hard-works which earned them a place in the Indian football squad. We, the people of Manipur are with them. They are the face of Manipur,” Shri Letpao Haokip said in a press meet held at the Secretariat Conference Hall today.

Shri Letpao Haokip, who himself was a professional footballer, announced Rs. 10,000 each to the eight players from his personal end as a token of encouragement.

The Minister said that the Government has a policy for awarding special incentives to international players from the State. He said that every sports person who represented the State or the country in International arenas are given Rs. 5 lakh cash incentive. The same will be applied to the eight footballers selected to represent India in the U-17 World Cup, Shri Letpao Haokip said.

The Minister also congratulated referee Thumli Joysing Monsang of Chandel on being selected by Professional Games Match Officials Ltd (PGMOL) for a programme in collaboration with All India Football Federation (AIFF) and IMG. “I feel proud of him,” he said while adding that it is a matter of pride for Manipur as well as India to see a young referee got selected to undergo such course. The Minister also promised possible financial assistance from his side before he leaves for the course.

The Minister said that incentives would be given to all players in recognised disciplines who participated in National/International events through proper channel. There is 5 percent job reservation for sports persons in every recruitment. In some cases, outstanding sportspersons are given Govt. job immediately by creating suitable posts in commensuration with their qualification.

Shri Letpao Haokip also said that playground development in the grassroots level will be taken up under Khelo India project.

Replying to a query, the Minister said sports infrastructure construction which are left unfinished in every district of the State would be completed by the present Government at the earliest.