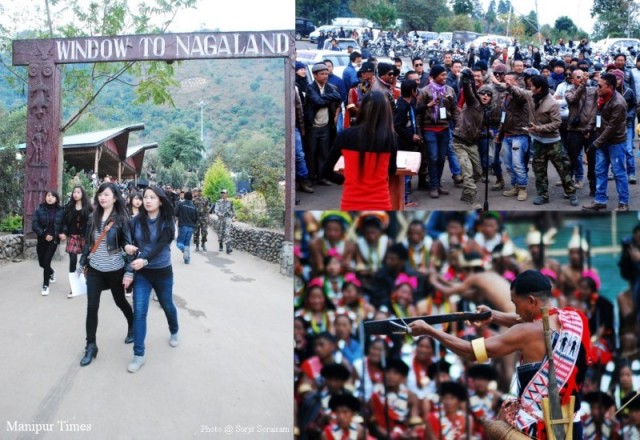 ‘Next year the riders meet will be held at Mizoram. In 2014 the riders from other State have requested us to host the riders meet in Manipur and it is a very good and aspiring event because we have many people coming from every North Eastern State and other parts of India like Kolkata, Gujarat says RK Tombisana.

We rode with the theme ‘when we meet we grow’, tug of war, wrestling, bullet maintenance and cleanliness, lottery of bullet on registration coupon where an Enfield bike is kept as prize was a special feature of the riders meet.

Ibempishak from Uripok Imphal who does Cane and Bamboo business in Imphal spend Rs 6000 in transporting her goods to the Hornbill festival where she make a good sale and profit.

She has been occupying a stall of bamboo and cane products along with other handloom items in the Hornbill festival since the last four years. Her daughter who is a Lecturer in one of the colleges in Kohima alerted and took initiative for participating in the festival.

Ibempishak carried business items worth 80 thousand in a Sumo Car and she has sold almost all of them in 5 days with just 20 to 30 thousand worth value left in her stall for the remaining two days.

A stall booking has a value of Rs. 2500 for 7 days, we have to apply for it when time comes says Ibempishak. There are few other people from Manipur who opened up stalls during the festival.

Talking about the stalls there are permanent set ups with bamboo works and it is very systematic and dedicated effort from the concern administrator of the Nagaland government who have initiated the work of hosting week long cultural fest the Hornbill Festival to promote tourism and to tape the cultural assets of Nagaland.

Many products which could be a souvenir depicting Nagaland were sold during the festival. Wood craft items, paintings, clothes, knives, dry flowers, pottery, Naga Chilly, and various products were sold at the Bamboo Pavilion just at the entrance of the Heritage site and some parts among the ethnic huts.

The venue adorn by standing bamboo huts where different wood crafted dummy depicting the identity of a tribe in their cultural dress and holding certain tools relating agricultural works or hunting weapons are show cast for visiting tourists. The simple but well spacious venue at Kisama Heritage Site is just as wonderful.

Participants of the festival dance and sing their cultural feats at their specific tribe hut within the heritage site while waiting for their turn for show casing their cultural talents inherited from the ancestors. First week of December is a misty winter when the festival takes place. Foreign tourists loiter around the town during these days and they come with still and video camera to film the colourful cultural exhibits from Ao, Angami, Chang, Chakhesang, Khiamnuingan, Konyak, Lotha, Phom, Pochury, Rengma, Sumi, Sangtam, Yimchungru, Zelian, Kuki, Kachari.

The stage is set simple with sitting gallery around the ground where different ethnic tribes act their recognition feat as in dance, hunting, sports, and daily activities. Well the simplicity of the show is as unique and representable for outsiders to understand the livelihood of the people living in various part of the State.

Dressed in attires ancestor wore with bows and arrow in their hand while enacting the hunting act brought laughter to the sitting crowd at the amphitheatre. Cultivation and meal at the paddy field where one cooks and serves the laborious cultivator is another amazing show piece.

Love the simplicity, play simple seems to be the card. Another ethnic group came in and dance with plates in hand. Yet another group came with dart board and dart slings for accuracy competition. It was swift action quite spectacular.

Well the weather was good. If you walk up the heritage site you are open to food cuisine where you are served with variety of cooked, smoked and boiled meat. Other vegetable foods are also made available with snacks and local brew. Sitting on a bamboo bench and munching is a chill for many with a different sensation. There are bigger stalls where you can have meal and the whole dedicated space at the heritage site is a much happening place for everyone young and old.

Some youths are seen climbing up the top of the hill at Kisama.

At the town scene Enfield riders numbering around 200 roared the streets as they drive with sleeping bags and mats ready to roll down the night and drive the day. Well much fun is sighted among bullet riders as a part of 1st North East Friendship Rally who gathered near the World War II museum complex at the festival site for the 4th North East Riders’ Meet (NERM).

NERM is an annual meet of Royal Enfield Riders of North East India and this year, it was hosted by Nagaland Motorcycle Club at Kisama as a part of the Hornbill festival. 25 riders from Royal Rider Manipur took part. Riders from West Bengal, Pune and Delhi also took part in the rally. A grand reception of the riders were organised with photo exhibition of the Royal Enfield and a light music by a young and beautiful singer who enthralled the riders with her melodic voice.

Hindi and English numbers and the crowd dance to the tune. Well an elderly man in full traditional wear gave a stunt dance all but it was fun with music and a light group dance. The nightingale gave her best.
Hornbill National Rock Contest

The biggest show of hornbill festival is the Rock contest participated by bands from across the nation. 22 bands from different States – Nagaland, Manipur, Meghalaya, Mizoram, Karnataka, Maharashtra, West Bengal and Delhi took part in the four day rock contest organized by the Music Task Force.

Gingerfeet, Kolkata won the Hornbill National Rock Contest, Clueless Attention and Black Rose, both from Nagaland emerged as the second and third place winners.
They walk away with a cash prize of Rs 5 lakh, Rs 3.5 lakh and Rs 2.5 lakh respectively with citation.

The rock contest is a grand event where the cash prize is big and attractive and the stage is set to bring out the best talent of the nation. In this event Nagaland draw a huge tourist from within the nation who came to participate the event with band members and well-wishers.

Car Rally
Another show that attracts huge tourists is the car rally organised as a part of the hornbill festival. At night the sound of the rallying car with its unique silencer zoomed. It was pompous and the people of Kohima are friendly with the tourists during and after the grand events. They are there to guide you the roads and speak to you when you enquire anything.

The night is such a happening one where huge number of people gathered at the night bazar. Eat outs, toys, and various items were sold at the dedicated street where night bazar is open to the public in connection with the festival. Everyone was seen well dressed and the night was sparkling with lights and celebration mood. It is the time where friends meet friends and families go out together. Christmas is only few weeks away and stuff like Santa Claus cap or stars are sold at the market. While some people walk, some are seen munching hot stuffs served from the temporary kitchen set up at the streets corner. The buzz in the night goes on till 11 pm and the street resembled the daytime as vehicles carried lorry away the temporary set ups.

Imlibenla Jamir, the 17-year old beauty was crowned Miss Nagaland from 18 contenders at State Academy Hall. Dovine Venuh and Semersungla bagged the first and the second runners-up titles respectively.
The crowd was limited as it took place in a mini auditorium. The entrance fee was Rs 500 minimum. The stage was cosy but the participants were screened in a brain storming session with three rounds of ramp.

Vision
The Hornbill festival – a three day energy packed event with stage set for a pompous get up going live on website with a mission to promote tourism in Nagaland has drawn attention to many since the last few years and it has crossed a decade of continuous performance. It is a good initiative from our neighbouring State Nagaland.

North East is gearing up with certain festivals like Zero Festival of Music (Arunachal Pradesh), Karbi Anglong Youth Festival (Assam), Manipur Tourism Festival (Manipur) and many other State events from our neighbours. In the years to come the group of State club together will definitely become a heaven for tourists.