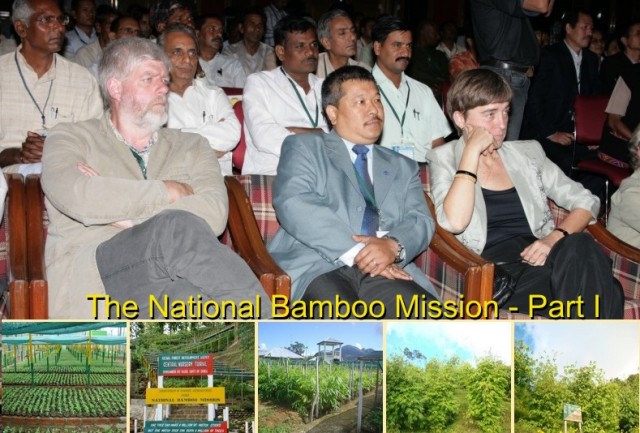 With a view to harness the potential of bamboo crop in the country, the Department of Agriculture & Cooperation (DAC), Ministry of Agriculture have been implementing a Centrally Sponsored Scheme called National Bamboo Mission (NBM) in 27 States in the country with a total outlay of Rs. 568.23 crore.  The Mission envisages promoting holistic growth of bamboo sector by adopting area-based, regionally differentiated strategy and to increase the area under bamboo cultivation and marketing.  Under the Mission, steps have been taken to increase the availability of quality planting material by supporting the setting up of new nurseries/tissue culture units and strengthening of existing ones.  To address forward integration, the Mission is taking steps to strengthen marketing of bamboo products, especially those of handicraft items.

The Scheme is implemented by the Division of Horticulture under the Department of Agriculture and Cooperation in the Ministry of Agriculture, New Delhi. Under the NBM, an areas of 1,76,000 hectares will be brought under bamboo cultivation in both forest and non forest areas during 10th & 11th five year plan in both forest and non forest areas of land. Under this mission it is proposed to generate employment of 9.7 lakh man days & 50.5 million mandays through nursery and plantation activity.

The main objectives of National Bamboo Mission are:

•         To promote the growth of the bamboo sector through as an area based regionally differentiated strategy;

•         To increase the coverage of area under bamboo in potential areas, with improved varieties to enhance yields;

•         To promote marketing of bamboo and bamboo based handicrafts;

•         To establish convergence and synergy among stake-holders for the development of bamboo;

•         To promote, develop and disseminate technologies through a seamless blend of traditional wisdom and modern scientific knowledge.

The National Bamboo Mission will have three tire structures:

1) National   Apex Committee (NAC) under the Chairmanship of Union Minister of Agriculture.

2) National Steering Committee (NSC) headed by the Secretary, Department  of Agriculture & Cooperation,  to oversee the activities of the Mission and approve the  Action Plans.

3) National Bamboo Cell (NBC)   headed by the Mission Director, NBM, in the DAC, Govt. of India.

Overall targets to be achieved under National Bamboo Mission are:

Main Target groups under NBM are:

Since inception, 1, 65,037 ha land has been covered with bamboo plantation. An area of 45,347 ha of existing bamboo plantation has been improved for higher productivity.  In addition, 1165 nurseries have been established to supply quality planting material.  In different States, 30,675 farmers and 4996 field functionaries have been trained in the area of nursery management and bamboo plantation.  In order to generate awareness among bamboo growers, 36 state-level and 413 district-level workshops/seminars have been conducted. Similarly, an International Conference on “Improvement of bamboo productivity and marketing for sustainable livelihood” was organized in 2008 in New Delhi, which was participated by more than 500 delegates.  In order to promote bamboo and its products, the States have participated in twenty-eight domestic trade fairs including India International Trade Fair (IITF), Delhi.  In addition, seven bamboo wholesale and retail markets, three retail outlets and three bamboo bazaars have been established in Assam, Mizoram, Kerala, Maharashtra, Orissa and Nagaland.

Agro forestry trials comprising bamboo grown with agricultural/ horticultural crops and medicinal plants have been initiated under different agro-climate conditions in Himachal Pradesh, Uttarakhand, Eastern Uttar Pradesh, Jharkhand, Madhya Pradesh, Karnataka and Tamil Nadu.  Clonal nurseries have been developed and clones of hill bamboos have been assembled in Forest Research Institute, Dehradun and clones of industrially important tropical bamboo species assembled at Institute of Wood Science and Technology (IWST), Bangalore.  Extensive surveys have been conducted in the bamboo forests/ plantations of Karnataka and Tamil Nadu and disease/insect infestations have been identified and resulting damage have been assessed. Clonal propagules of Bambusa balcooa, B.nutans, B.tulda and Dendrocalamus hamiltonii were produced and multiplied through macro proliferation in Rain Forest Research Institute, Jorhat, Assam.  Clones of important species of bamboo were collected and transplanted for evaluation at State Forest Research Institute, Arunachal Pradesh and at Institute of Wood and Science Technology, Bangalore.  Field trials at Tropical Forest Research Institute, Jabalpur reveals that chlorpyriphos (0.05%) is found to be most effective for control of bamboo leaf roller.  The study continues and is yet to come to final conclusion.

India with a population of over 1 billion covering in an area of 3.29 million km2 is the 7th largest and the second most populous country in the world. Around 73% of its people live in rural areas, relying mainly on agriculture for their livelihood. Only 55% of the land area is considered arable, and each cultivable hectare has to support from four to seven people. Over time, population growth has declined but continues to remain close to 1.94% per annum. Still, as far as Human Development Index is concerned, India ranks 124 out of 173 countries in 2000. Although India has made substantial progress in living conditions, the impact has been diluted by population pressure and resource availability.  India’s economic growth rate has risen and has also gone up to become more stable over time. Since 1980 it is the highest amongst the developing countries outside South-East and East Asia. However, across the various regions of India, it remains quite uneven.

As a result, poverty remains a dominant feature of its socio-economic condition, with around 30-40% of the population (1027 million) living below the poverty line. India remains amongst the poorest countries in the world with a per capita GDP of US$ 330.

Agriculture remains the single largest contributor to the well – being of the poor and it sustains over 70% of the rural labour force. It has been assigned very high priority to development and as a result food grain output exceeded 200 million and the country becomes a marginal exporter. About 300 million people are to be added to the Indian population in the next 20 years. Further growth in the net sown area is likely to be constrained by increasing urbanization, addition of competing claims of the production of food, fibre, fodder and fuel and land degradation. Approximately 17.4 million ha of land is still affected by soil erosion and degradation and 8 million ha with 40% cropped area is affected by floods annually and about 64 million ha of net cropped area prone to water stress and drought. Of the 768435 km2 recorded forest (23.385% of the country’s geographical area) only 675, 538 km2 actually sustains forest cover. Thus, 416809 km2 is dense forest cover and (7.9% open forest) accounting for only 12.7% of the total geographical area, compared with the recommended figure of 30%. The total forest and tree cover is 757010 km^2 that is 23.03% of the total geographical area. The Bamboo spread over an area of 10.03 million hectares, 12.8% of the total forest cover of India. The plant wealth is about 45,000 species (12% of the global plant wealth).

Liberalization of the formerly closed and highly regulated economy since 1990 has resulted in an increase in the rate of growth and a modified structure of the economy. After decades of being one of the slower growing developing economies led by the manufacturing and service sectors, growth accelerated to 5.5% in 1994-1995. It has touched 7% this year with a record foreign exchange reserve of over $100 billion. The contribution of agriculture is about 30% of GDP, and services and industry 41% and 29% of GDP respectively. Although declining in its contribution to GDP, agriculture remains a key economic activity, providing a livelihood for over 64% of the population. The growth of the agriculture sector has been below average at 3.4%. It was significantly above the population, growth rate permitting the country to feed itself and to accumulate sizeable food reserves, in spite of iniquity in income distribution that continues to constrain access by many to adequate supplies of food. Now that India is poised to become a developed country by 2020, it should give more emphasis on its strengths rather than look at the weaknesses.

Ministry of Agriculture and Co operation, Government of India.