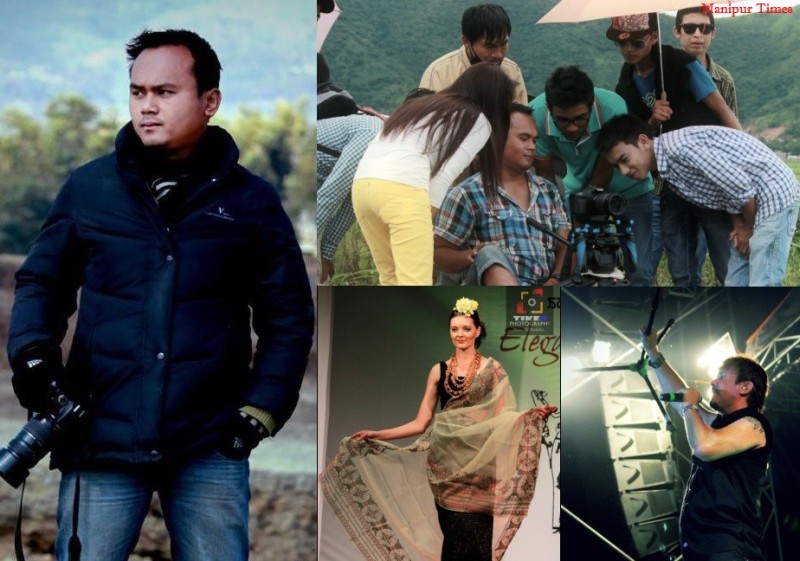 This is a story on an emerging photographer who have dedicated most of his time on his passion and followed his dream of achieving many feats. The love of quality and dedication has earned him a name and his quality shoots have pushed him towards recognition by many a photo lovers. Some of his dedicated shot are a well-run in many of the deputed websites. He is presently dedicated with his friends in establishing a photography society with various objectives towards promoting Manipur in different aspects.

He is the photographer for Fashion designer Bung’s Annual Calendar 2013 where Riya Sanabam and Jennifer Loukham are the models.

Recently he work with eminent stylist and national figure Robert Naorem for designer, make up and stylist shots. Robert Naorem contacted him after seeing his photo work from the last Manipur Fashion Extravaganza 2012 and did an exclusive collection in the month of July 2013.

He also works with Designer Doren Freeway an eminent fashion designer who has a fashion wear stall at Usha Hall complex, Paona Bazar. Shoots mostly are costume based with models.

Designer Karan Thokchom, Galifpa, Broje Kshetrimayum etc are some of the designeres Tiken work with most often.

He has shoot most of the happening rock fest in Manipur. Like the Firehouse show down in Imphal. Phoenix, Metal Conventions etc.

Certificate is a need goes one big concept but passion, dedication and creativity for excellence is a must.

“People show my photo and they like it. I became popular. They ask me to shot. They respect my job and I feel good.

Earlier people criticize me for buying a costly camera. I like to base on creativity. I do not work hastily. I like quality work.

Earlier my banner was Tiken Thokchom now it is Shutter Garrage. I am trying to improvise.

I was interested in photography since 1999 and I started shooting in Analog.

The album is a work out in loving memory of his mother Thokchom (ongbi) Delhileima Devi.

The story is about a happily married couple. But an unfortunate illness took away the life of the lady. The pang of separation haunted the life of the guy and he recalled every moment he has shared with his loving wife. The album depicts flashbacks. The care of a husband when his wife got ill is well depicted in his video album. The day when the couple got married, the happy days when the couple fall in love before they get married. The days when they meet on Facebook and get to know each other are highlighted in the video album.”

It took 2 days to shot the video album. 3 Digital cameras from members of Manipur Photography Society were engaged.

‘The shooting lasted till 10 pm where we work hard a lot. It almost takes 45 days for post-production at Lai Creative Art Studio. The album is built on concept and here it is a distinguish story telling. Synchronising with the lyrics is another feature of the album. One can see some distinguish work here and it is always learning for us too”, said Tiken Thokchom in an interview with Manipur Times.

According to the dress traditional or casual we determine the landscape. Daylight shooting is good. Golden hour is from 3 to 4pm says Tiken who loves to shoot at natural landscape. His outdoor shooting comprise of 4 to 5 members.

“When we shoot for eminent Manipuri film actress Bala Hijam, we went to Andro it was almost 1 pm. We were anxious about the time. Reflector work was good. We have a team of good understanding; the artist cooperated well and took less time.

It took me one day for the shot. I shot some 80 shots and most of them are classic” says Tiken.

He started my fashion photography somewhere in Dec. 2010

Bung by Bung yearly calendar shot for 2013 was done by him. The models are Riya Sanabam and Jennifer Loukham.

Some works of Tiken Thokchom.

He worked as a cinematographer in Original Sound Track of Lanpham, Manipuri feature film.

He is an M.Sc IT pass out, waiting for his job (applied for die in harness) at RIMS department where his mother had worked.

Tiken is the eldest among two brothers and a sister. He is son to Th. Jhangkarnath and late Th (o) Delhileima Devi of Sagolband Meino Leirak.

To all the photographers who like photography both amateur and professional, as a photography lover there is only one thing he would like to share, “it is just to click to your ideas. One need not have a DSLR to become a great photographer. He or she can bring out the best from any basic Camera.”