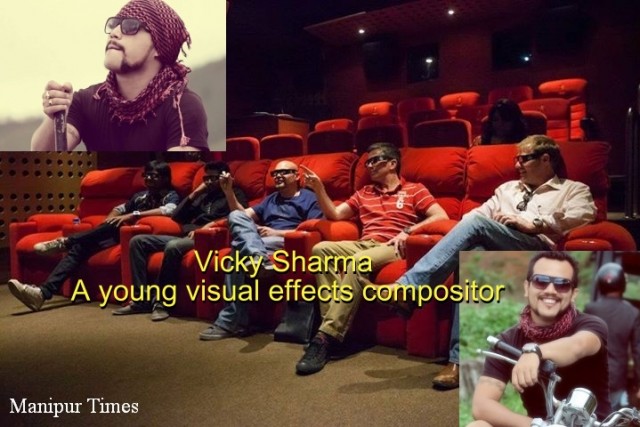 “Visual effects composition is a challenging and tough career that demands high will power and creativity. Making a good and meaningful film requires a good visual effects compositor. As this job needs high level creativity, the compositor’s mind remains in a dream world of different shades of imaginative sequences, far away from real life. Ironically, such technical professionals associated with films are paid less in Manipur as our people’s general outlook on films is limited to only entertainment. This general outlook needs to be changed”.

Laimayum Vicky Sharma, a young and dynamic visual effects compositor of Manipur, shares some tit-bits about his career to Manipur Times in an interaction.

The young compositor has so far taken key roles in giving new meaning and giving new life to some Hollywood blockbuster films through his creativity of visual effects. Some of the film projects in which he worked include ‘My Soul to Take‘, ‘Star Wars Part-1‘, ‘Narnia- The Voyage of the Dawn Trader‘, ‘Harry Potter – Deathly Hollows-Part 1‘, ‘Harry Potter – Deathly Hollows-Part 2‘, ‘The Green Lantern‘, ‘Transformers‘, ‘Clash of the Titans‘, ‘Wrath of Titans‘, ‘Cats n Dogs’, ‘Shrek‘, ‘Harry Potter Half Blood Prince‘, ‘RA 1′ (Bollywood); ‘Immortal‘; ‘Man in Black-4‘ and ‘Star Wars Part-2‘. His work is, no doubt, a pride of the state.

By the dint of his creative talent in visual effects composition which was appreciated at large, Vicky Sharma who was working as a simple Visual Effect Compositor could, in just three years of his work in Prime Focus Company, become the Co-Team leader in Roto Department and Team Leader and instructor of 132 trainees at View-D Stereo Compositing Department of Prime Focus, Mumbai.

He completed 3-year diploma in VFX Specialization Course from Frameboxx Animation & VFX in New Delhi in the year 2007and Diploma in Graphics and Multilingual Desktop publishing under C-DAC . After completion of these courses, he started his career in the world of visual effects in PRIME FOCUS, a Mumbai based global visual effects and 3D stereoscopic conversion service provider in 2010 as a Visual Effect compositor.

However, he had to return to Manipur leaving his job in Mumbai as nobody was there in his house to look after his mother after the marriage of his sisters.

Apart from all his family responsibilities, he also intends to bring changes in Manipuri films in terms of visual effects. He has set up his company Lai Creative Art Studio at his home and is working on visual effects and started compositing effects for a few Manipuri music videos like Nongmatang. He is also taking up some projects with Manipur Photography Club. Listening to music, playing cricket and chess and making new friends are hobbies of this 26-year-old young man. His software skills include Adobe Premier, Adobe After Effects, Adobe Photoshop, Eyeon Fusion, PF Track, Apple Shake, Foundry Nuke and operating systems include Macintosh, Windows 2000/XP/, MS-office.

Vicky Sharma likes to give a boost to the Manipuri film industry by creating new and exciting genres of visual creativity for the audience. His main area of expertise is conversion from 2D to 3D among others.

Almost all the movie goers erroneously believe the work of visual effects as film editing but both are different entities. Presently, the cameraman, editors and visual effect compositor who are the off-screen artistes of a film are given equal remuneration by the film producers in Manipur. It is wrong as the work volumes of these professionals are different. Moreover, remuneration paid to these off-screen artistes is too low to maintain family in Manipur. Such circumstances sometimes make him feel to go back to Mumbai, said Vicky.

He said that persistent determination and dedication is necessary for anyone to achieve the desired goal.

“Strong willed and focused individuals always stand out with flying colours among his competitors and colleagues in their chosen career. State youths need to explore new exciting opportunities of life; and parents and guardians must not pressurise them in choosing their career. The general mindset of almost all the parents and guardians in Manipur seem to be limited only to  medical, engineering and some other technical courses. They choose this course of studies for their children without exploring the potential of their children. It is not a right thing to pressurise a child having innate talent of art to undergo training for medical or engineering. Parents are required to explore other course of studies for their children. Students should be given the liberty to choose the career of their best choice”, he said.

“After the death of my father who was working as Section Officer in Manipur Secretariat, my family suffered extreme poverty. It was a hard time for my mother to manage the family with the small amount of pension of my late father. While I was studying in Delhi, I had to toil a lot to continue my studies with earning as my family failed many times to remit money for my studies. While I was undergoing 3-year diploma in VFX Specialization Course from Frameboxx Animation & VFX in New Delhi, I was selected by Prime Focus, Mumbai to work as a visual effects compositor in their company. This company with which he associated has many major Hollywood project contracts. The company gave me only Rs.4500 as monthly salary. It was a challenging struggle for me to manage all the expenses of room rent, electricity, water and my studies etc with the small earning. Almost all my colleagues who were working with me in the company left the job because of low salary. However I continued with the job as I always dreamt of becoming an expert visual effects compositor in life through working with the company. Many sleepless nights passed during my struggle. My salary gradually increased in course of time and reached up to six digit. Although, I could gain the fame what every visual effect compositor like in life, I had to leave this high paid job in Mumbai to look after my mother at home”, recalled Vicky.

Vicky said that the films he watched during childhood inspired him to be a visual effects compositor. He was so curious about how films were made and searched for it inquisitively. He is now all set to promote his Lai Creative Art Studio as one of the best studios in Manipur by processing many films, music videos etc with high quality and meaningful visual effects.

“The door of his studio will always be open for all those visual effects compositing aspirants of the state to undergo training at an affordable price. Learning such technical course outside Manipur requires high expenses. This huge expense will be saved if once his studio is functional as a full-fledged training centre”, Vicky said.