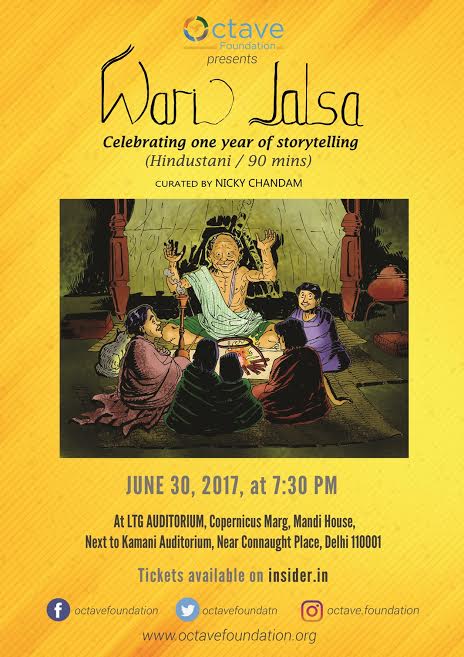 Wari Jalsa is meant to celebrate and mark a year of the existence of the storytelling series titled Wari by Octave Foundation. It is a celebration of an initiative which aims to provide a platform to the lost art form of live narration of folk stories translated into Hindustani from across India and the world, as a tool to promote cultural insights and unity amongst diverse communities.We bring on stage, folk stories from South of India, Bihar, Rajasthan, Manipur along with live folk songs presented in different formats by six artists.

Wari is the curated storytelling creative arm of Octave which is reintroducing the art of storytelling for adults and for children. A one of its kind curated show of fascinating stories translated and adapted from different time zones and cultures performed by various artists. The word Wari means story in Manipuri language.

The performance is slated for June 30, 7:30 pm at the Little Theatre Group Auditorium, Copernicus Marg near Mandi House, New Delhi.

Octave Foundation’s Wari started its journey in June 2016 and since then has reached over 12,000 people spanning across schools, literature festivals, and curated shows. We have put up 14 Wari performances at difference spaces in New Delhi, Kumaon, Jaipur, Jodhpur and Gurgaon in this span of one year. This celebratory edition has the following five stories:

Interweaving three small tales, one from mythology, one from south of India and one from a historical text, we showcase how inspite of the all pervading talk about development and evolution,nothing has really changed from the beginning of the world till date for us humans.The story from South of India is adapted from the book Bharat Ki Lok Kathaiyen translated by Kailash Kabir (translation of Folk tales collected by A.K. Ramanujan).

Set in Bihar, it is an amusing tale by Phanishwar Nath ‘Renu’ about a couple going to watch Nach at a village fair and the complications that arise because of an inevitable delay.
Language: Hindi/Bhojpuri | Category: Short story Duration: 15 mins
Performed by: Abhinav Sabyasachi

Based on a folk tale in Kannada, the story is a political satire with universal appeal. This story is available in many languages and the most popular one is Andher Nagri Chaupat Raja
Language – Hindi | Category: Folk tale Duration – 20 mins
Adapted and Performed by: Valentina Trivedi

A woman’s journey, her story narrated as poetry in motion. An amalgamation of words and emotions expressed through dramatised movement and music.
Based on a Rajasthani folk story adapted by Valentina Trivedi
Duration: 10mins
Performed by: Preeti Agarwal Mehta with live singing by Niti Pandey.

A story about how the fear of the unknown came into the world.
Adapted from a Manipuri folk tale by Nicky Chandam.
Duration: 20 mins | Narrated by: Ashish Paliwal

1) A teacher- educator and storyteller, Valentina Trivedi believes she must have been a curious darting squirrel in a previous birth and hasn’t been able to shed those qualities! She enjoys writing in both Hindi and English and has written and performed stories for adults as well as children: A lifelong passion for reading and telling stories has led her to experience it in different ways: as a Dastango (performance artist of the recently revived ancient art form of Urdu storytelling, Dastangoi), a scriptwriter for tv shows and films, director of documentaries and a senior copy writer in advertising. To make a difference in the way learning is perceived and experienced by children and adults, she co founded ‘Kaleidoscope.’

2) Abhinav Sabyasachi is the founder of ‘Paltan’, a theatre and art group. He is originally from Bihar and now lives in Delhi. He has been doing extensive theatre with groups like IPTA,’Sansaptak’, Sehar Theatre Group. He has done plays in Hindi, Bengali, English, Maithili, Urdu and French and conducts theatre workshops. Abhinav is also a freelance journalist, writer, published poet and a painter.

3) Nitin Sukhija has dabbled in all forms of Media. He comes with a long association with television and films. Stage remains his first love, though. A little vagabondish in nature, he is currently based out of Delhi. Nitin loves to travel and explore people and cultures. And yes, he loves to tell a story too.

4) Preeti Agarwal Mehta is a maverick freelance creative artiste who explores different mediums like theatre, film, movement, writing and photography. She is a special needs educator and counselor by training. She works with Karm Marg, an NGO for disadvantaged children.

5) Niti Pandey is a singer and writer working with a Delhi based choir band Manzil Mystics from last 7 years.

6) Ashish Paliwal is Delhi based actor, voice over artist and theatre producer. He has been working in theatre and the arts since 1996.He is one of the founders of Barefoot Theatre which is a Delhi based production company, with a penchant for creating and producing fresh, original, Indian work.

Nicky Chandam is an avid chronicler of arts through her photographs and words. She is an emerging writer, poet, curator and producer. Originally from Manipur, she is a now a Dehalvi after
living in the city for more than a decade.She is the Founder & Managing Director of Octave Foundation which aims to connect North Eastern India with the rest of India through the medium of art and cultural exchanges.