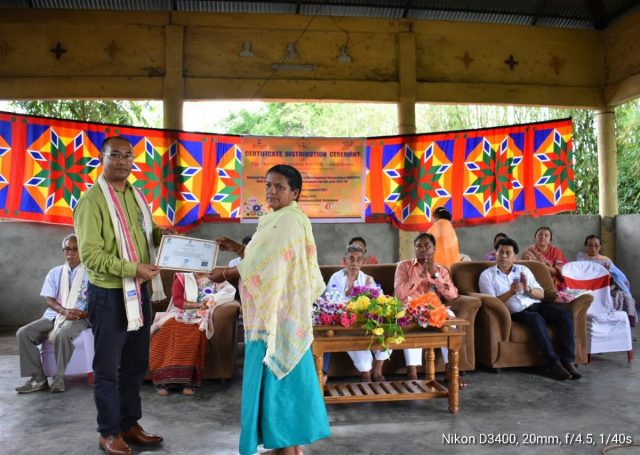 Under this scheme, Chanu Creations, Thangmeiband has provided skill development training to 100 OBC Candidates (weavers) in Bishnupur District at two centres (50 beneficiaries each centres) in Bishnupur Awang Leikai and Nachou Awang Leikai, training started from 4th December, 2017 to 17th December, 2017. After completion of the training, Chanu Creations has made ordered of Home Furnishings Items to ex trainees of these centres.

At the end of the function, Proprietor/CEO Chanu Creations Smt. Chirom Indira has issued cheques to head of each centres for their finished products.

Chanu Creations also has trained to more than 8000 weavers in Manipur & Tripura under Paradhan Mantri Kaushal Vikas Yojana (PMKVY), a flagship scheme of the Ministry of Skill Development & Entrepreneurship (MSDE) as RPL Facilitator made by Textile Sector Skill Council (TSC) in the year 2016-17. At present (2017-18), Chanu Creations is providing RPL-PMKVY to entire North Eastern States of India including Sikkim as PIA. The efforts of Chanu Creations and her dedication brings smile to thousand of weaver in the region.