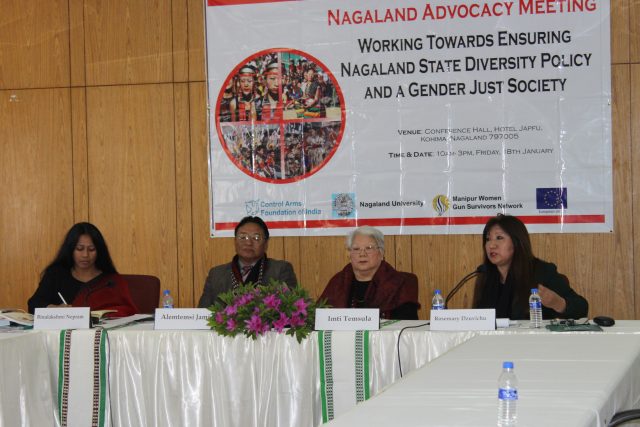 18 January, 2017 : Control Arms Foundation of India and Manipur Women Gun Survivors Network in collaboration with English Department of Nagaland University, organised a state level meeting on 18 January 2017 at Hotel Japfu in Kohima, Nagaland. This meeting was attended by different women led organisation, government officials, academicians, civil society and students. Settling the context of the event Ms Binalakshmi Nepram, Secretary General, Control Arms Foundation of India, said that we are here to find solutions for racial discrimination and gender based violence. It’s not only Northeastern who are facing racial discrimination, it is also some other communities who are facing the same. She also emphasised that if we work with our supportive men, the situation of women will surely improve.

Mr Alemtemsi Jamir, former Nagaland chief secretary and the member of Bezbaruah committee said that gender justice and removal of racial discrimination are part of sustainable development goals and the efforts are being made to achieve these by 2030. He also mentioned about current situation of Nagaland and said that the crime rate in Nagaland is 6% but I think the actual figures can be higher.

He also mentioned about 33% reservation issue and said that this is not a fight between men and women but of certain issues. The present situation could be resolved through more negotiations and resolutions. He further said, “We bring it up on a more gentle way to overcome crises of identity”. 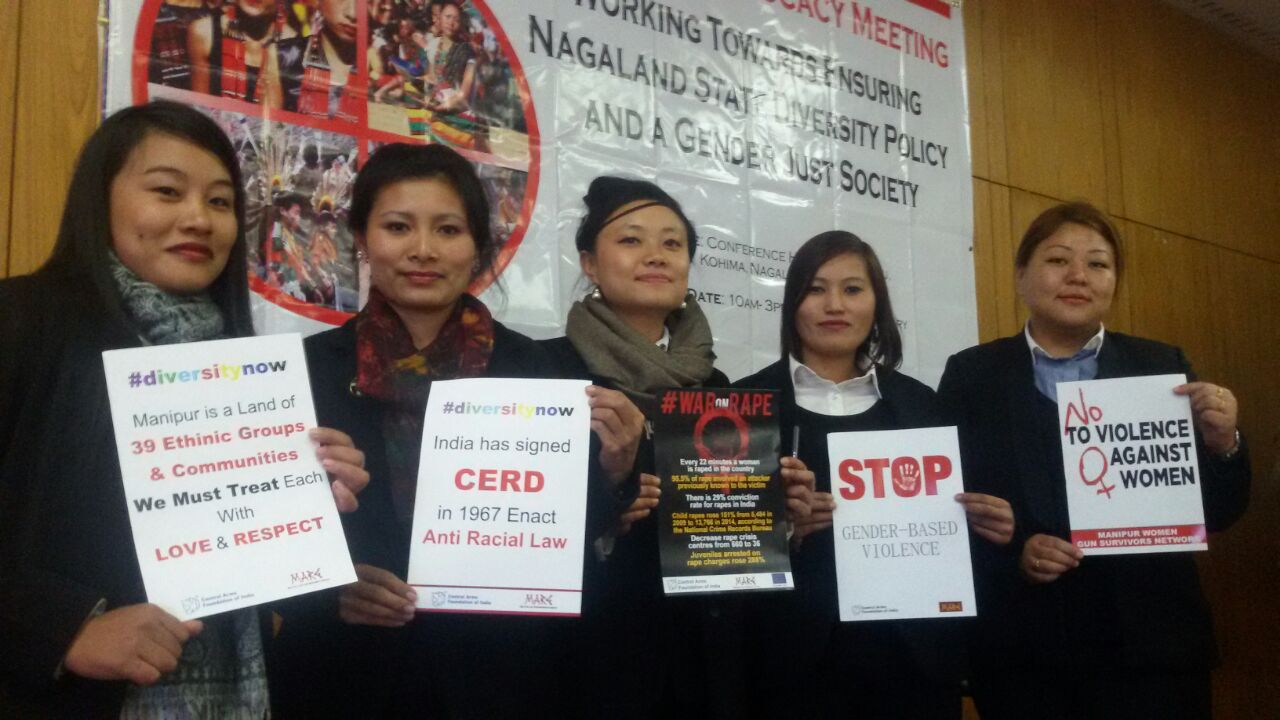 Mentioning about crime rate against women Dr Temsula, Chairperson, Nagaland State Women Commission, said that most of crimes go unreported because of family pressure and land pressure and this practice doubly victimises the women. So passing the laws would not be helpful unless we tackle the grassroots of the problems.
She further stated that we are all guilty of discrimination because we have all discriminated people in our lives at some point. We will have to introspect our lives and try to reach out to our neighbours and friends so that we can bring this discrimination to an end.

Dr Rosemary Dzuvichu, HoD, English Department, Nagaland University and Advisor, Naga Mothers Association, said that the Nagaland elections soon. Out of the 390 candidates most of them are women. These women are not rich. They are coming because they are backed by strong political parties. None of the political parties have backed women before this. We will see the real elections this time. As far as elections are concerned we will see changes. She further emphasised that the Article 371A is being misinterpreted. Lawyers who misinterpreted the law should be debarred from practice. Especially laws that are there to protect its women. Does 371A is all what we have.

Article 371A is being misinterpreted. Lawyers who misinterpreted the law should be debarred from practice. Especially laws that are there to protect its women. Does 371 A is all what we have. Women in Nagaland constitute around 48%, almost half of the Naga population and history indicates women being extremely active politically. In 60 years of Statehood, not a single naga woman has found a place in Nagaland Legislative Assembly. Today, the Issue of 33% Reservation in the Municipal Councils for women is a huge debate. On the other hand, National Crimes Records Bureau (NCRB) 2015 data suggests that the rate of crimes against women is 6 per cent. Due to the series of trauma of conflict that the Naga society has suffered, there is mistrust in other communities which leads to racism and discrimination against other communities.

Based on the discussion following recommendations were made:
• Process of empowerment women not to be looked at in a confrontational manner but in spirit of economic, social and political empowerment.
• Gender Justice and removal of racial discrimination are part of sustainable development goals to be fulfilled by 2030. An awareness and campaign to fulfill these goals.
• Efforts to ensure proper implementation of the existing laws at hand.
• For a better implementation of the existing laws, an understanding of the tribal society.
• Civil Society, lawyers, academicians hold the onus of proper interpretation of laws such as Article 371 A. Any misinterpretation of laws is dangerous for the wellbeing of the society.
• Increased awareness of the state officials, police officials, of people living in farfetched areas to ensure that rights of all citizens are protected.
• Ensure that Central Governments directive of ensuring that Fast Track Courts are set up in all districts of the State.
• Documentation of unreported crimes against women. Networks of civil society organizations, students, lawyers. Such that admissibility and legality of the data is upheld.
• Community mobilizes and community justice workers in farfetched areas of Nagaland to document and record cases.
• Use the power of social media to set up a blog, virtual space to bring out unreported stories.
• All women to work on a shared vision, through re-establishing relationships, networking and interacting with other workers in the regional, national or international level.
• To implement Bezbaruah Committee Report recommendations of formulating an All India Anti-Racial Law, to end racial discrimination against all people of this country and within Northeast India.