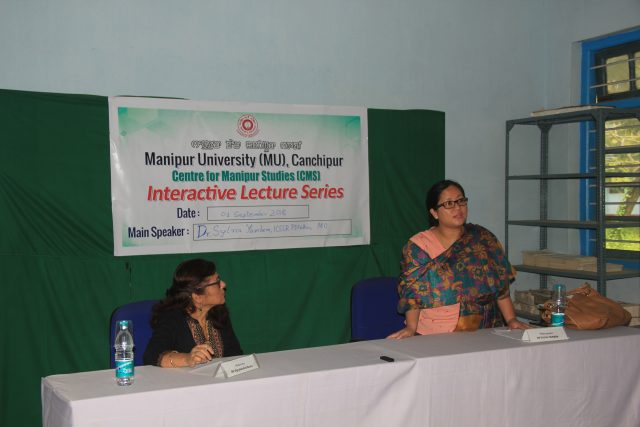 1st September 2018 : Centre for Manipur Studies (CMS), Manipur University (MU) organised an interactive lecture on the topic ‘Governance, State Capability and Public Services: Power Reforms in Manipur’ with Dr Sylvia Yambem, ICSSR Post Doctoral Fellow, Dept. of Political Science, Manipur University as the main speaker and Dr. Vijaylakshmi Brara, Associate Professor, CMS, MU as the moderator. In her presentation, she highlighted that public services and citizens’ access to public services is an important indicator of the performance of the government. While emphasizing the nature of prevailing governance particularly as whether a strong capable state or a weak state, she attempts to study the reforms initiated in the delivery of power services, to highlight upon the capability of the government of Manipur to deliver public services and the nature of governance prevailing in the state. In the 21st century developmental discourse public goods and services is a fundamental right- a rightful entitlement of the citizen and the duty of the state to deliver.  Citizen’s access to public services consequently indicates the performance capability of the state and the strength of governance. The concept of capability herein implies the administrative capability of the state to implement policies and programmes and its ability to perform its most basic functions such as the delivery of public services, policing, law and order, regulation, etc., inherently a trait characteristic of governance or good governance. Governance and state capability to deliver public goods and services and implement programmes and policies in Manipur is largely characterized as weak and are generally in dismal condition. This was also true of the power services. Power services, at least till the introduction of the pre-paid meters around 2012 and the corporatization of the electricity department in 2013, was characterized by issues of load shedding, power cuts, low voltage, erratic power supply that hindered industrial as well as domestic consumption. The unpublished Manipur state development Report (Government of Manipur) in fact attributed the constraints to industrialization in the state to the “inadequate availability, unreliability and poor quality of all infrastructural services like power”. However with the reforms in the power services, there has been marked improvement in state capability to deliver power services. This stands in contrast to the general consensus on the otherwise dismal state of public services in Manipur. Though Manipur has a long way to go in building inclusive political institutions, by learning from the experience of reforms in the power sector, it could be emphasized that overall state capability can be strengthened and governance improved in Manipur. What is required therefore is the willingness and commitment to reforming public services by strengthening state capability to ensure good governance, she concludes.

Faculty members, research scholars, PG students also actively took part in the discussions and deliberations. The lecture concluded with a moderator’s remark lauding the presentation of the main speaker by stating that such academic inputs is necessary for initiating policy changes.