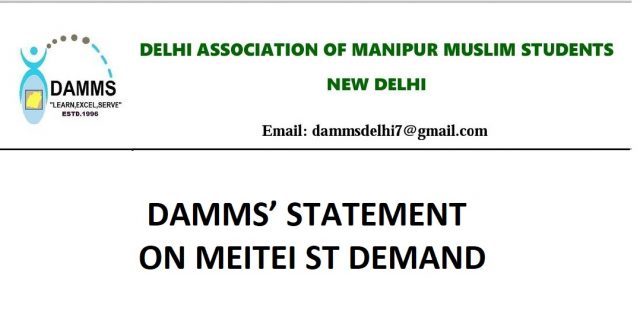 International Labour Organisation (ILO) gives a working definition of indigenous people in its 1989 convention as the descendant of the population “who inhabited the country or geographical region at the time of conquest, colonisation or establishment of present state boundaries.” Moreover, the indigenous population also retains some or all of their indigenous social, economic and political institutions irrespective of their legal status. Indigenous people’s movement has happened all over the world where there are oppressed, conquered and colonised people. Manipur also saw the rise of indigenous people movement recently, the demand for Inner Line Permit. However, the demand for the rights of indigenous people has now shifted to the demand for the inclusion of the Meiteis in the Scheduled Tribe list. The theoretical explanation of the shift is that the indigenous people are the same as tribals in the Indian context. When it comes to ILO’s understanding of the world tribal, it says that tribal people also retain some or all of their social, economic, cultural and political institutions, irrespective of their legal status. However, the definition of tribal people does not take into account whether there was conquest, occupation or colonisation. It just says that “their social, cultural and economic conditions distinguish them from other sections of the national community.” For example, the tea tribes in Assam which British have brought in are not indigenous to Assam. However, the populations already existing in Assam at the time of British colonisation are indigenous. Moreover, given the fact the Indian academicians and the government do not acknowledge the category of Indigenous people in India, the demand for the rights of the indigenous people has been shifted to the demand for the inclusion of the Meiteis in the list of Scheduled Tribe. There is a forced equation that indigenous people are tribals. Yehoumee which translates as indigenous is now forced to mean tribal given the limitation imposed by the constitution of India.
Pangals have settled in the early 17th century before the Hinduisation of the Valley and even before the significant Brahmin migration in the Imphal Valley. Since then the pangal community has contributed enormously in the historical processes and developments which have been taking place in Manipur. There is no denying that Pangal just like Bamons is indigenous to the valley of Manipur. Both Pangals and Meiteis are listed as Other Backward Classes as of now. The listing of these two communities in the same category is problematic given the vast economic and social inequality between these two communities in the context of Manipur. Pangal community, which is around two and a half lakh population is one of the most marginalised communities living in Manipur. Now Meitei STDC urges the government that the Meities should become ST. This demand leaves the Pangal community who have been classified as OBC along with the Meitei in a precarious situation. If the Meiteis are listed as ST and Pangals as OBC, then it would be a huge blunder of the principle of social justice which underlies these categories, OBC/SC/ST. The four categories, General, OBC, SC and ST, expressed the social and economic hierarchy in general. Communities which are not categorised as OBC/SC/ST are generally taken as historically the most dominant people in this country, such as the Indian Brahmins or Marwaris. The next in the hierarchy is the OBC when it comes to economic and social well being, followed by communities listed as SC and ST. If the Pangals remain OBC and Meiteis become ST, then it would mean that Meitei are less economic and socially capable than Pangals.
Whether Meitei-Loi communities who are already in the SC list will be listed as ST or not remains unclear. The same problem persists if they are not listed under ST because SC is above ST in the general social and economic hierarchy in India. Meitei Bamons who practised strict amang-aseng against Nagas, Kukis, Lois, Pangals and even to the common Meitei people could be classified as tribals. The section of Meitei, Raj Kumar sagei, who oppressed and ruled the Meiteis and the other communities historically could also be listed as ST saying that they are indigenous since there is forced equation between indigenous and ST. These are the confusions involving this demand. However, there is no denying that the ruling dynasty and Bamons are indigenous people too along with the rest of the communities, except the mayang Hindus, Muslims and mayangs belonging to other religions. Moreover, the ST demand has evoked strong oppositions from the hill people of Manipur. Nagas and Kukis are vehemently opposing the ST demand made by a certain section of the Meiteis. Their concern is justified as different communities are staying in Manipur together in harmony and a section getting included in the ST list matters to others who are already listed as ST such as Nagas or Kukis. The Meitei ST demand committee should acknowledge that the demand is creating suspicion and tension between different communities living in Manipur and disturbing the communal harmony.
Delhi Association of Manipur Muslim Students’ (DAMMS) urges Meitei STDC to look into the matter given the unclarity in the ST demand, as mentioned above, and the communal disharmony it is creating in Manipur. It also urges to acknowledge the principle of social justice and the relationship underlying these categories and the responsibility that one community has towards other when it comes to social justice and harmony.