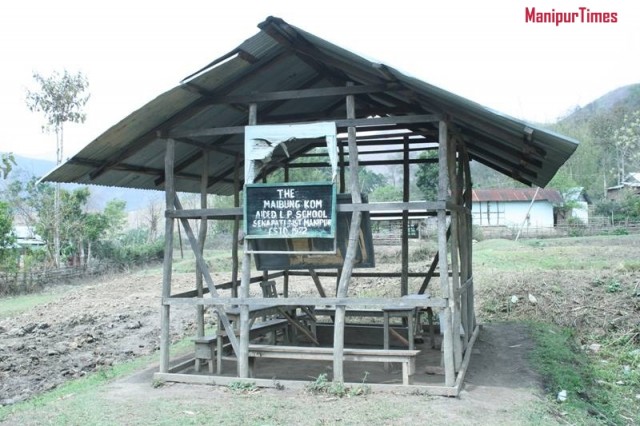 Even as the Right to Education Act aimed at ensuring free and compulsory education to children below 14 years of age was implemented all over the country, the same Act has no meaning for the people of Maibung Kom Village in Senapati district just about 20 km far away from Imphal.
In a bizarre, contrary to the purpose of the Act, students of Maibung Kom Primary school have been sidelined from the facilities under the RTE act. About 30 students of the village have enrolled in the school manned by two teachers with no facilities of Mid-day meal, school uniform under Sarva Sikhshya Abhiyan while students reading in other schools are enjoying various facilities under the same scheme.
Manipur Times, in a recent visit to this villages located under Sadar hills sub division in Senapati district, could detect the government school building in a pathetic and dilapidated condition with no walls on four sides and poor infrastructures. It almost looked like a cowshed. Government has failed to take up any measures to repair the dilapidated school despite umpteen appeals from the villagers.
Maibung Kom village is inhabited by about 400 populace of Kom Community with 150 households.
For Maibung Kom Village, the Primary School is the one and only educational institution for the students of the village, from where many brilliant students had earlier groomed out. The school has Nursery to class II. Since there is no other school in the village, almost children of the village have to rely on the dilapidated school as they cannot afford expenses to study in the well established schools in Imphal or outside. Those children from sound family background do not study in the school, they left the village for studying in good schools in Imphal, said Village chief Chothang Kom. The school was established in 1972.
The school once had four teachers. Their number was again reduced to two when one of them was transferred.
Apart from the poor educational facilities, the village is facing acute shortage of drinking water, health care facilities. There is no any primary health centre in the village. The villagers have to visit RIMS or JNIMS for availing health care facilities. For road connectivity, thanks to Manipur Legislative Speaker Th Lokeshor who is also Khundrakpam AC MLA for repairing the village road connecting Haraorou Tangkham village.