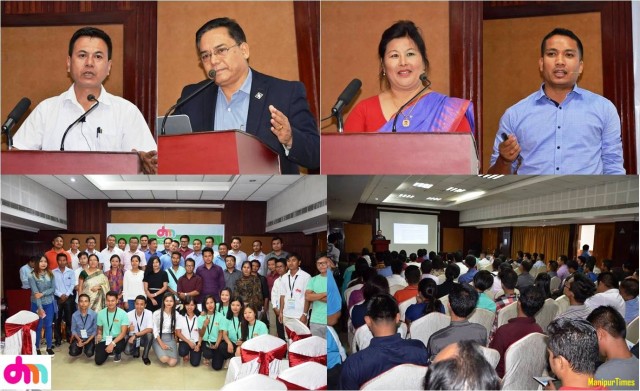 Dr Dhabali motivates youths to opt for entrepreneurship rather than seeking paid jobs
IMPHAL, July 15: While lamenting on the ever increasing trend of educated youngsters who are running from pillar to post to get a government job, Managing director of classic hotel Dr Dhabali Thangjam insisted that the youths of the state should opt for entrepreneurship as a career pointing out that the present chaos of unemployment problem could be resolved to some extent when thousands of entrepreneurs come up in the state. Speaking as resource person during the daylong seminar on Dynamic Entrepreneurship organised by Dynamic Manipur at Hotel classic, Dr Dhabali who spoke on the topic Ethical Entrepreneurship & Future of Manipur said, “Unflinching decision and hard effort are the prerequisite things to achieve success in every profession.
Aspiring entrepreneurs must be ready to face the challenges ahead. Success would never come without overcoming the challenges first”. Stating that the local terms “ Shenjao Paiba” and” Shendan Lambi” which the general public frequently use in a derogatory tone have demoralized the entrepreneurs, he appealed to the people to scrap these two terms from the soil of the state. Giving a maxim to the budding entrepreneurs, Dhabali insisted that they should endeavor more rather than making more promises stating that people would lose their trust when entrepreneurs failed to keep their promises. “Don’t take important decisions when you are angry and don’t make announcements when you are in an extremely happy mood”, he cautioned the budding entrepreneurs. On business ethics, he maintained that unethical business practice actively or passively cause harm to people, animals or environment. Following proper ethics, maintaining sincerity and honesty are important values for every professional towards achievement of the highest pinnacle of success of life, he said. While responding to a query from the audience regarding the increasing trend of corruption and other malpractices haunting the Manipur society, Dhabali said that corruption, favoritism and nepotism have deep rooted in Manipur which the state would take several years to get rid of it. Correction should begin from us first, or else such malpractices, corruption would continue haunt our society leading to creation of a society filled with violence and hatred, he opined.
Dr. Keshorjit Sorokhaibam, MIMS explains entrepreneur as a fantastic career opportunity in the 21th century. He further elaborates on how a person can become an entrepreneur and the wonderful roles that an entrepreneur plays for social upliftment. One of the most important aspects of entrepreneurship is the employment generation and regional development. In Manipur over 3.5 lacs jobs are created by private sector which is comparatively larger than the jobs provided by State government.
On Women Entrepreneurship: Challenges & Its Solutions, M Subra Devi, Managing director of Meira foods who is among the successful lady entrepreneurs in Manipur said that women entrepreneurs are key players in any developing countries, particularly in terms of their contribution to economic development. Women play a great role in a family, however their activities are not acknowledged by men, she said. While stating that Manipuri woman are taking a pivotal role in socio-economic activities, she said that Manipuri women owned most of the small businesses in the state. Citing the example of Ima Keithel, she said that women vendors have been maintaining their families and helping their kids by carrying out their small business at the Khwairamaband market. There are many households run by women’s earning, she said. Stating that generally women are unable to take their own decisions in a patriarchal society like Manipur, she encouraged the budding entrepreneurs to spare some moments out of their busy schedule for household chores to think and take decisions of their own so that they can start a business. Woman needs to be courageous and ready to fight the challenges ahead while opting for entrepreneurship as a career, she said.
Roshnikumar Yambem, MD of Globiz, who spoke on “Foundations of Successful Entrepreneurship” said that an aspiring entrepreneur should opt for the well defined business that would suit him or her, and then works on it hard until achievement of success. He said that entrepreneurs may fail several times, but he/she should strive for with an unflinching determination.
Following Dynamic Entrepreneurship program, Dynamic Manipur will continue to pursue its ongoing programs called Lean Startup Workshop and Dynamic Startup in coming months. Today’s program was participated by 115 registered participants who are aspiring to be entrepreneurs.
The event was endorsed by MIMS (MU), Globizs Web Solutions, Manipurtimes and Siroi Offset Printers, Thoubal.