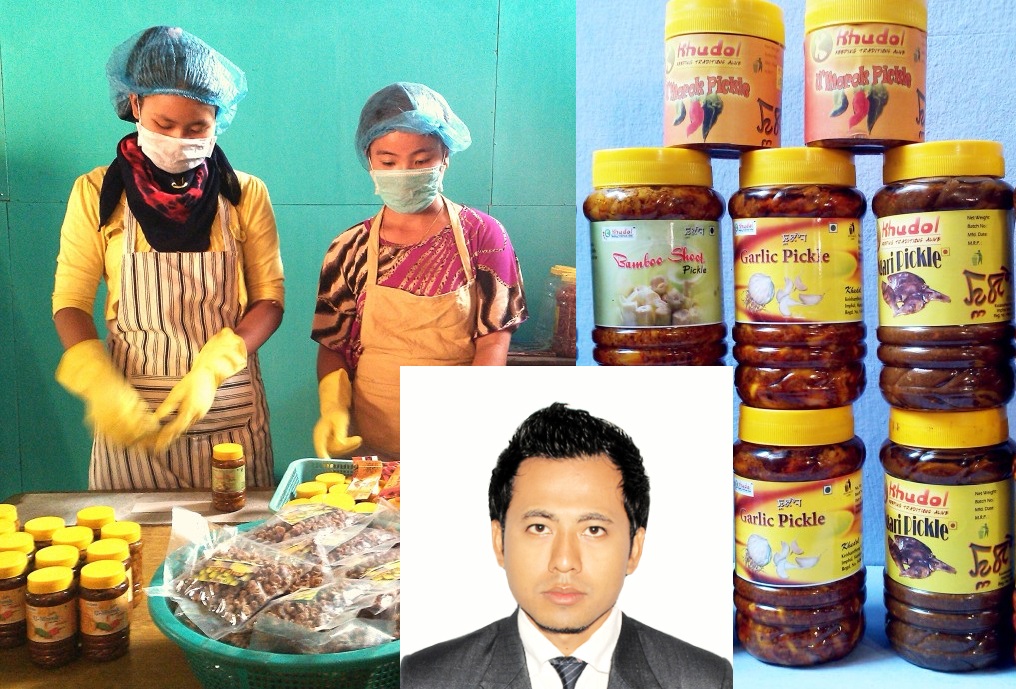 With its business booming and hopeful to receive a luminous green signal of certifying its product ‘safe’ from government institutes, Khudol has the reasons to celebrate its spring. Located at Kwakeithel Mayaikoibi in the capital city Imphal, Khudol, which literary means gift in Manipuri, is a small scale food processing industry aiming big.

The industry is distinctively transforming the luscious seasonal fruits and vegetables of the state into a new zest of taste in the form of pickles, fruit candies and much more with a philosophy of ‘keeping the tradition alive’, with the application of ‘sui generic art and science’ of processing skills. Khudol can be well regarded as a gift to sustain the taste of indigenous food items for the people of the state, as products of Khudul have become ‘must items’ to be carried by them when they travel to other states or countries.

‘Awesome taste!’ – is one apparent comment, Khudol often receives instantly after the munchers taste the fruit candies and pickles made of the diverse seasonal fruits and vegetables at its pavilion during Manipur Sangai Festival 2012.  The visitors and the revellers in last year’s Chinjak Festival and Manipur Sangai Festival didn’t forget to spell out their genuine kudos to Khudol,which ultimately ledto buy an array of their food items in bulk packs for their kith and kin.

Believe it or not, their sales scooped more than Rs 1 lakh within 10 days at their pavilion in last year’s festivals. And, now they are getting ready to set forth for the upcoming festivals as well. They are swinging full to introduce and market a new item of pickle of un-pieced U-morok (king chilly/big chilly).

The success story of the industry was not scripted overnight but it was developed through ‘leisure pursuit and hobby into commerce’.  Its proprietor K Siddhanta Sharma said,”It was started by our mother as a hobby. She used to send her own-made pickles and dried fruit candies while we, all of our brothers, were studying outside the state, and she also used to market her items in the local kiosks”.  Shiddanta’s mother L Tilotama is a government school teacher and father, a retired banker. Shiddanta is the second son among four brothers.

Shiddanta further said that the idea of marketing his mother’s items was clicked in his mind while travelling in a local train somewhere in Mumbai, where he came across selling such food items.

26-year-old Shiddanta, who is a management graduate, later drove the idea home and started the business. He is now looking after the whole business. He said that the first initiation happened at Keisamthong Leisom Leirak at the maternal home of her mother where they have a piece of land. Siddhanta’s mother L Tilotama told Manipur Times that the initial investment was about Rs 7000 – Rs 10000 when she started the business.

Remembering the past, Siddhanta added that formal establishment happened on February 24, 2008, under his proprietorship as a food processing industry. He added that it happened only after my mother’s product became a little popular for its taste in local market and acquaintances. He also said that they sought suggestions and comments from many people, friends and acquaintances, including experts on the feasibility and implication of doing food processing business. And, later they built up a capacity staff, by facilitating training through food experts, food scientists, food engineers, and consultants etc. They are now providing employments to some unemployed locals and youth.

Khudol currently has nearly 12 retail outlets in Imphal with as many as 27 items comprising sweetie, salty and pickles of various kinds. Some of its popular products are:

When Manipur Times enquired about their future road-map, Siddanta said, “First, we are thinking about broadening the retails and distribution networks in the state, and then, in the later part of mid-2014, we will plan to make avail our products to all the major towns and cities of NE states of India.” He also said that they have initiated talks with some private e-com agencies of the state for accelerating their marketing activities. They would also explore the feasibility of importing their products to South East Asian countries, as their food habit and styles is somewhat similar in many aspects, he added.

While Manipur Times enquired about the challenging part of doing the business, Siddanta said that there are lots of challenges in making the business viable in Manipur due to socio-economic and political situation.

“Our business is dependent mostly on power supply, transportation etc. But, we sometimes face economic blockades for more than 10 days. For our business we need to stock all our required seasonal fruits and vegetables to bridge the demand-supply gap, and also we are somewhat dependent on other states for our packaging materials”, he said.

He further added that they haven’t got any support from any government agency to widen their business horizon, although they have sought help to some agencies concerned.