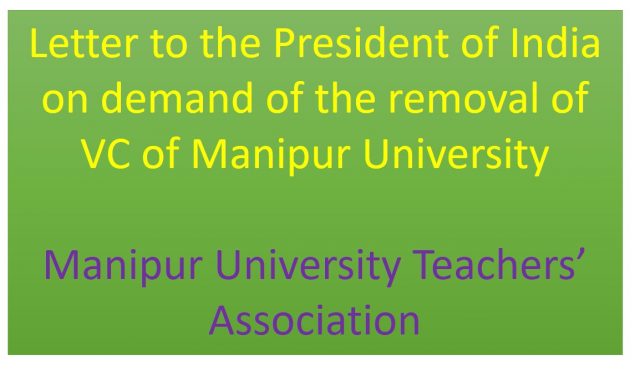 To
His Excellency
The President of India, and
Visitor of Manipur University

The Emergency General Body Meeting of MUTA held on 13th June 2018 discussed the on-going impasses in Manipur University. After a long and threadbare deliberation, it was resolved unanimously that the Visitor of Manipur University be apprised of the development on the University in right earnest, and also resolved unanimously to demand that an independent Enquiry Committee be constituted in right earnest to look into the charges of administrative and financial irregularities among others, levelled against the Vice Chancellor by the MUSU and public in general.

These on-going strike by MUSU is fundamentally caused by the dictatorial and arbitrary style of functioning of the present Vice Chancellor, Prof Adya Prasad Pandey in the university administration over the last one and half years since he joined the university on 26 October 2016.

These issues have arisen

A. Because the VC has made all important Statutory Bodies – such as the Executive Council, the Academic Council and the University Court – almost non-functional in clear violation of the University Act, norms and precedents. This immediately rules out the prevalence of scope for discussion and debate on important matters relating to the functioning of the institution. This facilitates his functioning as per
his own personal convenience:

i. Since the Statutory Bodies are as good as non-existent, he can act on the basis of his own volition without consulting the wisdom of the
various bodies;
ii. This creates the convenient ample scope for manipulation and malpractice in administration and financial matters (purchase, supply
and contract) without any opportunity to study by the Statutory Bodies and mandatory accountability.
B. The post of the Chancellor is a very crucial position in the functioning of the University. But the Post is now vacant since 5 Nov.2016, and the present VC has not yet initiated any mandatory process to fill the Post.
C. The University requires certain statutory posts for regular administrative functioning. These are the Registrar, Controller of Examinations, Librarian, Curator and University Engineer. But the VC has not bothered to fill these positions on a
regular basis in order to facilitate the reign of his own personal whims.

Some of the critical issues raised by MUSU, which have plagued the Manipur University and pulling the academic milieu of the institution down are:
1. Late attendance by VC to his office, say after 12.30 pm: Non-availability of the Vice-Chancellor in his office in the early hours of the day and thus causing the university administration much inconvenience. It adversely affects
all sectors, specially the students community.
2. Frequent leaves from the university without telling the exact date of his return: This has created a lot of disturbance in the university administration including the delay in the processing and movement of files. Expenditure for his trips including TA and DA during his whole tenure is expected to come up to be very high beyond any permissible limit. Further during his long and frequent leaves, he does not hand over the charge properly to any responsible person for normal functioning of the institute.
3. Purchase of various items at exorbitant prices without the prior approval of the Academic Council and the Purchase Committee: Main suspicion is the purchase of examination answer scripts, the supply of smartboards in all departments, the bullet-proof car, in addition to a white paper on the utilization of the amount in Indian Science Congress recently held at Manipur University.
4. Rational behind Y-Category security granted to Vice-Chancellor and its aftermath: The sanctity of the academic institute of highest learning is spoiled by the presence of Y-Security personnel. This violates the scope for free mixing of the VC with teaching community and students necessary for academic advancement.
5. Delay for interview of promotion of faculty members and failure to arrange interview for fresh appointment of faculty positions :
In spite of a series of memoranda submitted by Manipur University Teachers’ Association (MUTA), there is no interview for promotion of faculty members for a considerable long time. In addition there is no attempt to hold interview for fresh appointment of faculty positions (both vacant posts as well as newly created) even though there were advertisements twice. The departments are running with great
difficulties with acute shortage of teaching faculties.

In the light of the above, it has now become imperative that an Independent Enquiry Committee be constituted in right earnest in order to
A. Create an atmosphere of commitment, credibility and accountability in the University;
B. Provide the VC to come clean as per findings of the Enquiry Committee, and if so established his own position can be restored without tarnishing his reputation; and
C. Address his dogged refusal to any response from his end on the charges levelled against him.

With warm regards,
Yours truly,