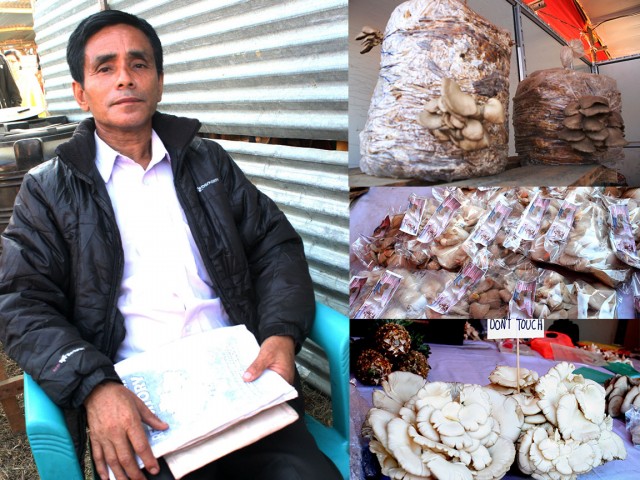 People normally think that success needs a huge investment, strong family background and bulk of resources. Though it is true to some extent, if somebody believes that these are the only means to achieve success, then the notion is not right.
55-year-old Shijagurumayum Ibohal Sharma, S/o Sh Binodkumar of Thangmeiband is a living example who has achieved success in mushroom farming without much investment and strong family background. He has achieved success by dint of his strong will, self determination and never say die attitude.
“Initially, I did not have any idea of mushroom farming. The idea of mushroom farming struck my mind only when I saw a demonstration of mushroom farming in a fair”, Ibohal said. He said that he was a jeep driver operating passenger service from Langol to Imphal in 1997. Once he accidentally got a chance to see a fair at Langol, presently Central Agricultural University. He was highly motivated to initiate mushroom farming after watching a mushroom farming demonstration screened during the festival. He then gave up jeep service and started mushroom farming with the seeds provided by ICAR Lamphelpat.
So far, he has trained more than 700 farmers of mushroom farmers. He said that 45 mushroom varieties are available in the north east of which only six varieties of mushroom are grown in the state. Of the six varieties, three varieties of mushroom are grown in winter while the rest are in summer season in Manipur, he said. He grows 3000 packets of mushroom in his farm and sells 30-40 kg of mushroom daily at the wholesale rate of Rs 100 per kg. With the number of mushroom consumers are on the rise, his farm cannot meet the increasing demand from the customers. Demand exceeds supply now, he claimed.
Ibohal has bagged best mushroom farmer award conferred by the Manipur government. He said that mushroom farming has come out to be a thriving business for him as he can now maintain his family comfortably with the income earned from mushroom farming. He claimed that he can earn Rs 27,000 to 30,000 as profit every month. He has also provided employment to workers from Andro to look after his farm located at Lalambung.
Ibohal expressed concern over the increasing trend of burning of straws in paddy fields after harvesting. He said that straw is a main raw material for mushroom farming.