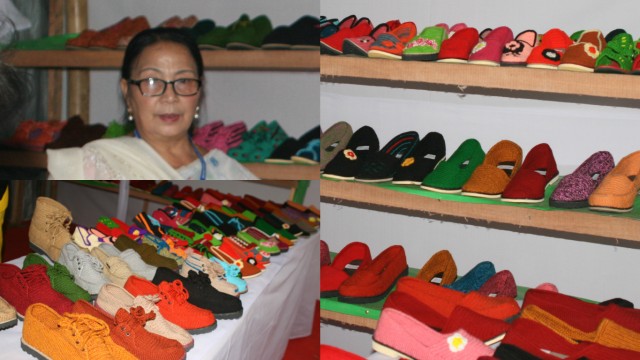 Moirangthem Muktamani Devi is a well known artisan from Kakching in Manipur’s Thoubal district who is into the business of manufacturing woolen knitted shoes. She has exported her products to UK, Australia and Korea besides supplying regularly to defense forces and local costumers under the banner Mukta Shoes Industry.

Moirangthem Muktamani Devi, a 54-year-old woman hailing from Kakching Moirangthem Leikai may be known to only few Manipuris but she is a National awardee in Micro, Small and Medium Enterprise and State awardee in handicraft. The woolen shoe maker Artisan had won the 2nd Vasundhara NE Woman Entrepreneur of the year (2013-14) instituted by Sreemanta Sankar Mission of Guwahati in a function held at IIM, Shillong on September 18, 2015.

Muktamani was born in December 1958 brought up by her widow mother as her father passed away when she was only six months old. She was married to Kshetrimayum Naran Singh, when she was only 17 years old and reading in Class X. In 1990 she established “Mukta Shoes Industry” in her locality. It was registered under DIC, Thoubal under wool and knitting embroidery section. As she got married at a very young age, she did face many hardships in starting a family of their own, going to field and working under scorching sun, which she did not experience such works at her parental home. Gradually she began learning how to work and earn a living and she was left with no other option. She worked day and night without any complaint and now she is a mother of three daughters and a son, who conceals the hard days and begins scripting success stories.

The accidental step that made her a success woman in the field of handicraft happened in 1989. As she could not afford to buy a new shoe for her daughter, she knitted on the sole of a torn Lee-shoe with woolen thread in the shape of a shoe. Her daughter was very happy seeing it and wore it on and off to school. However, she was afraid of getting punishment as the shoe was not a school uniform. During the school assembly, she started crying as one of the teachers noticed it. But the teacher asked her, “Who made it”? And he said he wanted the same for his daughter. Muktamani even knitted for her eldest daughter with little innovation. Muktamani’s experiment went on and slowly her creativity got enriched and thus getting orders from many people to knit shoes for them. During Manipur Sangai Fesival 2015, one could find knitted shoes of  Mukta Shoes Industry at Departmental Stalls #14.