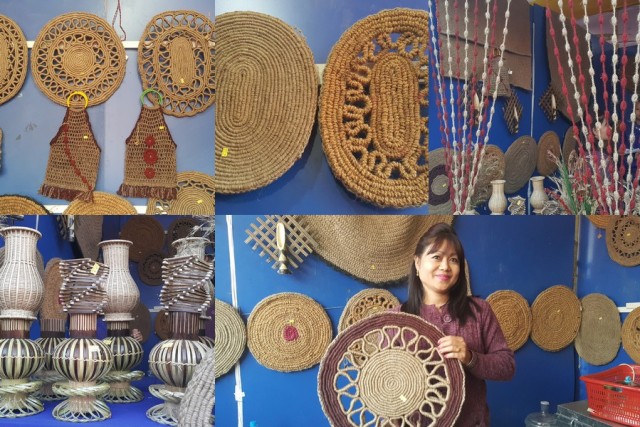 When she was bed ridden some time back, Sunita had a strange dream. She saw bags were flying around her. After she was recovered from her illness, Sunita determined to make bags. This was how Sunita started her jute craft.

Although he was brought up at Uripok Yambem Leikai in the heart of Imphal city, she was an obedient daughter and she even did not go to the market alone. She studied at Ibotonsana Higher Secondary School up to Class X.

After passing Class X examination in 1997, she continued her study at Little Rose Higher Secondary. In 1999, she passed Class XII exam and got into college life during which she was ill seriously.

She was bedridden for several days and she had a strange dream of ‘flying bags’. After some days, she found a yarn of jute in a dirty sack and a knitting hook in a drawer. From that day onwards, she recovered from her illness.

At that time, she also knew a little about dress making as well. She learnt dress making from Aruna Academy, Masjid Road during her school days. As it was against the wish of her parents, she never let know about it.

After completing graduation from Regional College in 2003, she devoted her time in dress making and designing. Beside she learnt hook knitting and thus her profession began to multiply.
In 2007 she got married to Jupiter Yumnam of Haobam Marak and now she is now a mother. Sunita organized an exhibition of jute craft at Nupilan Complex some time back. She is a recipient of Dr. Ambedkar Fellowship twice, and she has been selected for one and half months training at IIE Guwahati.
In 2010, she received State Award for her doormat knitted with jute. She received Merit Award before this too. She has worked with World Vision for 7 years to impart training to Persons Living With HIV.

She has given training to many trainees at different places like Khangabok, Wangjing, Sora, Yaiskul, Ukhrul, Sikhong, Nongpok Sekmai etc.

At Manipur Sangai Festival, her products were in great demand and even booked by firms from other states and countries. This was her first appearance in the festival although she had taken part in several other fairs. Sunita said that she can earn Rs. 3000 to Rs 4000 per day at Manipur Sangai Festival 2015. She said that she would support anybody who wants to adopt the craft as a livelihood.