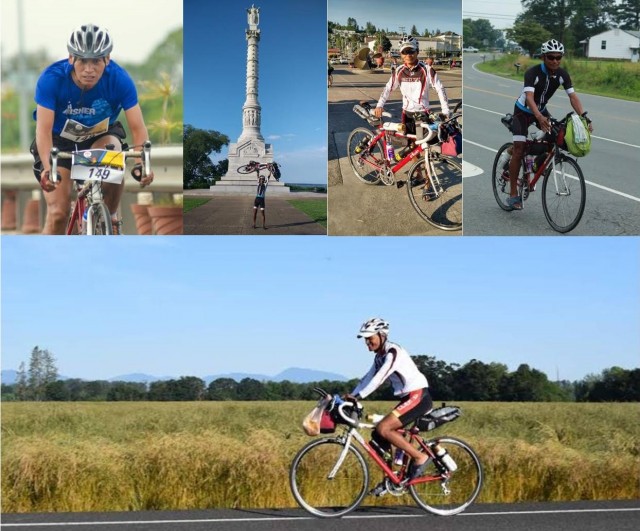 Thoudam Opendro Singh is a software professional from Bangalore and a native of Thoudam, Manipur. He used to cycle to commute to school in Ningombam which was 9 km away from home. Back then, it was a way to commute. Yet, he used to ride this distance in village roads in about 20 minutes. His passion for cycling developed when he became a part of cycling community called Bangalore Bikers Club sometime in 2010. Back then, 100 km ride was considered a long ride. Things changed when Bangalore Brevet (http://bangalorebrevets.in/) organized rides of distances 200, 300, 400, 600, 1000 and 1200 km within a cut-off time. The riders called themselves randonneurs, He bought a road bike in April 2011 and since then he has done 600 km in 2011, 1000 km in 2012. He was also the lone finisher in a touch 1240 km brevet in 2013 which saw continuous storms (https://brevetmgr.appspot.com/brevet/july2013-1200/results). His hunger for more challenge grew and he was part of a team that crafted a much tougher 1200 km brevet through many mountains in 2014 which came to be known as Bliss In the Hills (http://www.bangalorebrevets.in/2014/07/bliss-in-the-hills/). He rode the route himself and was one of the 4 finishers out of 76 riders (https://brevetmgr.appspot.com/brevet/oct2014-ooty/results). He repeated the same route in 2015.
He was still hungry for more challenges. He didn’t believe himself to be a super human and wanted to prove that ultra distances can be ridden with simple preparations and equipment. In a way, he wanted to remove the fear among many randonneurs of doing really long distance rides. At the same time, he didn’t want to spend too much. Trans Am came about just then and it fit his bill. It is about 7000 km long race along a typical touring route through high mountains, dense forests and country roads connected by bits of highway and small towns, on solo, all on self support, i.e. avail facilities, help and support that is available commercially along the route. One cannot take help from another rider, friends, families, etc.
He set out on the cheapest road bike in the market, which was btwin sport 1, which has been used for 6 years. Every rider is tracked using a unique GPS tracker that would transmit its locations regularly to telecommunication satellites and back to relay towers and trackers running on servers on the ground. Everyone is on his or her own to manage food, water, rest, sleep, clothing, laundry, lights for nights, power sources for electronic equipment, route map, tackling snow, heat, wind and rain and at times road blockades and diversions. Riders of all kinds from all over the world come and race. Some would come with the aim to do their best and win while some would come to enjoy the beautiful and scenic route. Whatever the aim is, every rider is challenged in so many ways that physical stamina is just a small part of the race. It needs strong will, determination, planning and attitude.
Opendro set out with an aim to race hard. But change of climate and food hit him hard. Some illness in the weeks preceding the race made the matters worse. Eating just about a small portion of what he would normally eat in such long rides, he was struggling to pick up pace. Sleeps didn’t come easy with the ailing condition. Three to four hours of sleep a day on any surface is a luxury. He would typically sleep on road side grass or gravels, motels, shades outside convenience stores and gas stations, churches, etc. He would skip sleep in some nights altogether. He would nap standing, leaning on the bike if necessary or just sitting with heads buried between knees. Due to unexpected heat or rain or headwind, running out of water or food still happened in spite of planning. At around 2500 km, he almost quit due to severe stomach upset. But he felt better after about 30 hours of rest and decided to continue. There was no looking back since then. He avoided foods that gave troubles, planned his stops better depending on the distance to the next town and weather conditions. Still recovering from the upset stomach, he took it easy for another 1000 km or so. Then he picked up pace gradually in the second half of the race, finishing the entire 7000 km in 27 days and 7 hours, a week more than his initial target.
“Taking more days, resting in the comforts of motels often, riding at slow pace made me feel like I was on a vacation and it took away some pride from the hard work. But it is any day better than quitting which I was about to at the initial stage. I’m satisfied with the completion”. He finished 30th out of 67 as per the live tracking with final results pending.
“I want to dedicate this feat to my mother who taught me perseverance and my wife who had wholeheartedly supported me for this mission. I owe a lot to my family members, friends and strangers around the world, cycling enthusiasts and well wishers alike for encouraging and lending immense moral support through tough times”.
He has no further plans of any major ride. He has done proud to the country. “I would be glad if my ride could inspire many common citizens to take up cycling for day today transportation and confidently take up such long endurance rides”. He himself claims as a more family man than an athlete. He trained for a mere 20 hours over two months preceding the race, running in parks and a couple of rides with friends. Most of the effort went in gathering information about the race, route, logistics, bike equipment, accessories and expenses.

Now, he just loves to ride with his five year old daughter around parks or in the road in an early Sunday morning.